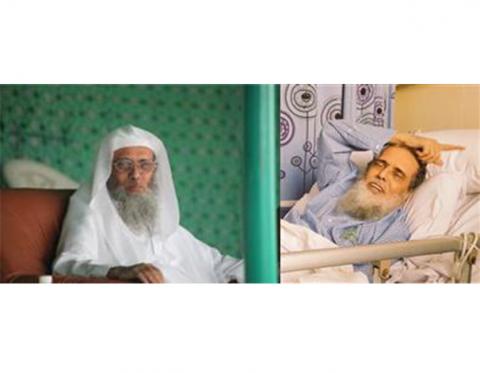 (Geneva, July 13, 2018) – Alkarama has requested the urgent intervention of several UN Special Procedures following the Saudi authorities’ arrest of 68-year-old Islamic scholar Sheikh Safar Al Hawali, his brother and four sons as part of an ongoing crackdown on freedom of opinion and expression in the country.

Safar Al Hawali, his sons Abdullah, Abdulrahman, Ibrahim and Abdulrahim, as well as his brother, Saadallah, were all arrested by the authorities over the course of July 11-13. Safar and his son, Ibrahim, were arrested in the morning of July 12 when State Security officers arrived in an ambulance and raided their home in the village of Hawala. Safar was blindfolded and both he and his son were taken away to an unknown location. Their whereabouts remain unknown to date.

On the same day, Safar’s younger brother, Saadallah, was also arrested at his home by State Security Forces.

The previous evening, on July 11, Abdullah and Abdulrahman were arrested at their cousin’s wedding in the city of Al Bahah, when heavily armed State Security officers stormed the celebration and took them to an unknown location. After reporting the arrests of his relatives to the international community, in the morning of July 13, Safar’s son Abdulrahim was also arrested by the authorities.

Safar Al Hawali’s family believes his arrest to be a direct consequence of his critical outspokenness against the authorities, and the arrests of his family members to be a form of collective punishment.

The arrests have taken place in the wake of a larger and unprecedented crackdown on freedom of expression, which began in September 2017. Since then, hundreds of public figures, among them scholars, academics, and human rights activists have been targeted, most of whom were arrested solely because they voiced criticism of government policies.

Al Hawali had recently published a 3000-page book entitled "Muslims and Western Civilization", in which he criticised the Saudi royal family, as well as the state’s ties with the United States, the UAE and Egypt.

A prominent Islamic scholar and leader of the Sahwa movement, which has criticised the ruling family for corruption and subordination to Western governments, Al Hawali had been jailed previously in a clampdown on Islamists in the 1990s. Al Hawali was arrested for opposing his country's ties to the US’s military operation to expel Iraqi forces from Kuwait, but no charges were pressed against him and he was released soon after. In 1993, he was banned from public speaking and dismissed from his academic posts.

On July 13, Alkarama requested the urgent intervention of the UN Working Group on Enforced or Involuntary Disappearances (WGEID), the Special Rapporteur on the promotion and protection of the right to freedom of opinion and expression (SRFRDX) and the Working Group on Arbitrary Detention (WGAD) to urge the Saudi authorities to release all six members of the Al Hawali family or, at the very least, to bring them under the protection of the law and inform their family of their fates and whereabouts. Alkarama highlighted Safar Al Hawali’s critical medical condition, as he previously suffered a brain haemorrhage and has a fractured pelvis.