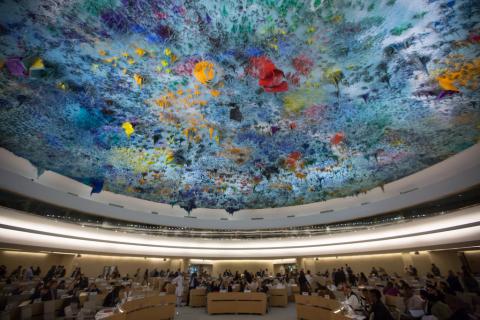 During the review, states assessed the UAE’s human rights record, expressing particular concern over restrictions to freedom of expression, the lack of an independent national human rights institution, the practice of torture and arbitrary detention, the absence of legal safeguards, the death penalty,  as well as women’s and migrants’ rights. Alkarama previously raised all these issues in its report submitted to the Human Rights Council (HRC) in June 2017, ahead of the UAE’s review.

Practice of torture and lack of accountability

Despite the UAE’s ratification of the UN Convention against Torture and Other Cruel, Inhuman or Degrading Treatment or Punishment (UNCAT) on July 19, 2012, torture has still not been eradicated, and numerous cases continue to be documented by several human rights organisations, including Alkarama.

To date, the UAE has not submitted its initial report to the Committee against Torture, overdue since August 2013, thus violating its reporting obligations under the UNCAT, and raising serious doubts as to the authorities’ real commitment to eradicating this practice. Hence, several countries recommended that the UAE submit its overdue report and engage in constructive dialogue with the Committee against Torture. Moreover, the Czech Republic and Italy called on the UAE to eliminate the practice of torture, prohibit secret and incommunicado detention, and put safeguards in place against torture and ill-treatment.

Torture is used by State Security officials both to extract coerced, self-incriminating statements, which are often used as the sole evidence in criminal proceedings, and as a form of punishment or deterrent. Furthermore, a climate of impunity prevails, as no serious investigations are being conducted into allegations of torture, and perpetrators therefore go unpunished. Qatar and Finland urged the UAE to investigate all acts of torture and prosecute those responsible for its order and perpetration. In addition, the Czech Republic recommended that the UAE ensure individuals have the right to a fair trial, and that they reject evidence obtained under torture.

Numerous states, including Denmark, Finland, Portugal and the Czech Republic also encouraged the UAE to ratify the Optional Protocol to the UNCAT, and to take the necessary steps to establish an independent, effective and well-resourced National Preventive Mechanism against torture.

Freedom of expression and prosecution of human rights defenders

Since the last UPR, the right to freedom of opinion and expression has been further restricted and systematically violated. Numerous peaceful activists have been prosecuted for criticising the government on the basis of an ever-restrictive legal arsenal. The most critical laws in the crackdown on freedom of expression are the Cybercrime Law, which punishes acts such as “insulting the ruler” or “damaging national unity or state reputation” with heavy prison sentences; the Law on Combatting Terrorism Offences, which defines terrorism in an overly broad and vague manner and criminalises nonviolent acts of criticism; and the amendments to the Penal Code, which severely curb freedom of speech. During the review, Switzerland, Sweden, Norway, Canada and Estonia called on the UAE to review legislation preventing the exercise of freedom of expression, to decriminalise defamation, and to amend the aforementioned laws to bring them in conformity with international standards.

In its report, Alkarama had previously drawn attention to the systematic practice of reprisals against peaceful human rights defenders, including 2015 Martin Ennals laureate Ahmed Mansoor, who was arrested in March 2017 in retaliation for his engagement with UN mechanisms and NGOs. During the UPR, numerous recommendations were made in this regard. States such as Italy, Austria and Belgium called on the UAE to protect human rights defenders, including by protecting them from reprisals for having cooperated with the United Nations. The UAE has been featured in the annual report of the UN Secretary-General on reprisals against individuals who have cooperated with the UN human rights mechanisms every year since 2013.

Lack of cooperation with the UN human rights mechanisms

During the review, Emirati Foreign Minister Anwar Gargash claimed that arbitrary arrests and detention did not exist in the UAE. Since the last UPR, and in clear contradiction to such statements, the UN Working Group on Arbitrary Detention (WGAD), upon Alkarama’s request, has issued ten Opinions declaring the nature of detention of over 85 individuals as arbitrary, since they directly resulted from the individual having exercised their fundamental right to freedom of expression and/or the individual was denied the right to a fair trial.

Following the adoption of the draft report, Julia Legner, Regional Legal Officer for the Gulf at Alkarama, stated: “Despite the Working Group’s call on the Emirati authorities to immediately release the individuals subject to its legal Opinions, the large majority of them remain detained today.” She continued by stating: “We regret to see that no UN member state made a clear recommendation in this regard.”

Overall, the United Arab Emirates received 230 recommendations from 97 UN Member States, which it must consider before June 2018, and inform the Human Rights Council of whether it will accept or reject the recommendations. The state should then implement the accepted recommendations before its fourth UPR cycle in 2022, in order to improve the human rights situation on the ground.