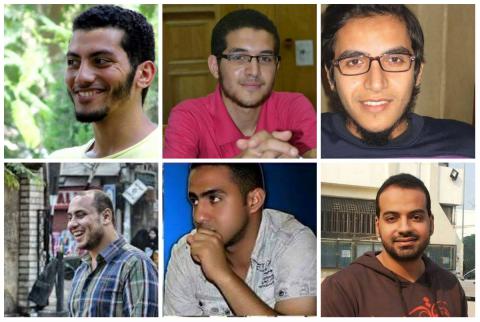 As the Egyptian authorities are under heavy criticism from rights groups and UN experts due to widespread violations of fundamental rights, on 7 June 2017, six students saw their death sentences upheld by the Court of Cassation in the “Mansoura Guard Killing Case”, after a seriously flawed trial solely based on coerced statements obtained under brutal torture. Should the death sentences be carried out, their execution would be summary and constitute a severe violation of Egypt’s human rights obligations.

On 28 February 2014, Abdullah Metwally, a security guard on protection duty for a judge in charge of the case of former President Morsi was brutally murdered by an individual using a nine millimetre pistol gun. In March, 24 individuals were arrested in various places and at different times.

The 24 individuals were charged collectively with the killing of Metwally and with “belonging to a banned group” aiming at obstructing the government and hindering public order and security. Some of them were further accused of “funding the Muslim Brotherhood” and “providing the latter with weapons and information to topple the government”. On 7 September 2015, after a trial marked by serious flaws, the Mansoura Criminal Court handed sentences ranging from 10 years imprisonment for two of the defendants, to life imprisonment for 14 of them, and death sentence for the eight remaining.

Among those sentenced to death were 30-year-old Bassim Mohsen Ali Al Khoreiby, 28-year-old Khalid Askar, 24-year-old Mahmoud Mahmoud Wahba Attia, 27-year-old Ahmed Al Waleed Al Sayed, 25-year-old Ibrahim Yehyia Abdul Fattah Al Azab, and 24-year-old Abdul-Rahman Mohamed Attia. These young students in medicine, pharmacy, chemistry and engineering in Mansoura, with no prior criminal records, were all subjected to severe abuses from Homeland Security forces from their arrest and through their detention and trial. On 7 June 2017, the Court of Cassation upheld the decision of the Criminal Court, leaving them without any legal recourse against the unfair sentence. Today their families are claiming their children’s innocence and imploring the authorities to halt the executions.

Each case follows the same pattern: all young men were abducted by Homeland Security forces, blindfolded, beaten and kept in secret detention, outside the protection of the law for long periods of time ranging from several weeks to several months. Following their arbitrary arrests, their respective families went to inquire about their whereabouts and the reasons of their arrests, only to be faced with the complete silence and denial of the authorities.

During these periods of secret detention – which amount to enforced disappearance, one of the most serious crime under international law –, the students were brutally tortured and forced to sign self-incriminating statements. They were hanged by their arms for several days, naked, severely beaten and burnt with cigarettes, given electrical shocks and one of them reported having been raped with a stick. It is only after this period that families were able to locate their children and tried, with great difficulty, to secure the assistance of a lawyer. The family of 24-year-old Mahmoud knew what happened to their son after his arrest on national television, when he appeared in a video produced by the Ministry of Interior, in which he was confessing to having committed “terrorist acts”. He was stuttering from fear, and looked lethargic and in a state of shock. After seeing the video, the family contacted the authorities, which still refused to inform them about his fate and whereabouts.

Despite the fact that the defendants contested the statements used against them in Court and showed the deep and still unhealed wounds from the cigarette burns and other abuses they suffered, judges of both the Criminal Court and the Court of Cassation ignored their allegations and their requests to be examined by forensic doctors. 28-year-old Khalid took his shirt off in front of the judge in to show him the gashes he still had on his back: however, the judge did not take any action. In each instance, the judges decided to base their decision on the self-incriminating statements as sole evidence to sentence the defendants, in clear violation of Egypt’s obligations under the UN Convention against Torture, to which the country is a party since 1986.

Adding to the numerous fair trial rights violations, including the denial of the right to legal counseling, the defendants were not able to call any witness or to produce any proof of their innocence. The only elements in the prosecution file were brought by the prosecution and the police, and consisted either of the coerced confessions or of police reports describing facts proven to be untrue by the defence lawyers.

“The horrific accounts of torture reported by the victims and their families, added to the blatant violations of these students’ most basic fundamental guarantees and fair trial rights, show the impunity with which security forces operate as well as the complete lack of independence of judges in this case,” said Radidja Nemar, Regional Legal Officer for North Africa and the Nile at Alkarama. “If the sentences are carried out, the executions will be arbitrary and show how little respect Egyptian authorities have for the right to life of their citizens.”

“In 2015 already, the African Commission on Human and Peoples' Rights urged Egypt to halt the execution of the six men since their trial was unfair, and observe a moratorium on death penalty,” said their lawyer Dalia Lotfy. “Egypt failed to comply with the decision, in serious violation of the African Charter that Egypt ratified in 1984,” she added.

Today, the students are still detained in different locations in appalling conditions, denied medical care, and for some of them, denied family visits. In light of these facts, Alkarama submitted an urgent appeal, on behalf of the families, to the United Nations' Special Rapporteur on extrajudicial, summary or arbitrary executions (SRSUMX) requesting the independent expert to urge the Egyptian authorities to revoke these death sentences and to investigate into the allegations of torture.