Violations committed against journalists increased in 2020 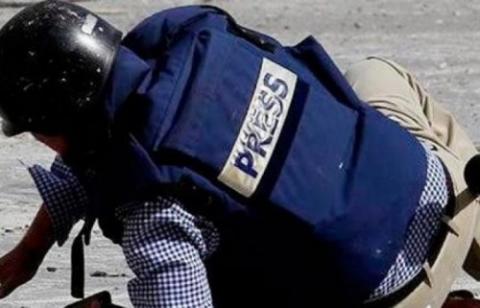 Alkarama expresses its concern about the escalation of violations against journalists in the Arab world during the year 2020. According to data published by international organizations concerned with the defense of journalists, including statistics published by the Brussels-based International Federation of Journalists, some 60 journalists and media field workers have been murdered in 2020. The New York-based Committee to Protect Journalists reports that there are at least 274 journalists behind bars, the highest number recorded by the Committee since the early 1990s.
For the past 15 years, Alkarama has been defending the rights of journalists and bloggers in the Arab world, victims of targeting and unacceptable and illegal repressive practices, and has filed individual complaints on their behalf with the United Nations human rights mechanisms.  In Yemen, Alkarama worked on the case of nine journalists kidnapped on 9 June 2015. They were taken to the prisons of Houthi rebels and subjected to forms of torture for exercising their right to expression and monitoring human rights violations. Five of them were released in mid-October 2020, as part of a prisoner exchange agreement between Houthi fighters and  the Yemeni government, but their four other comrades are still being held in extremely poor conditions and face execution orders issued by a Houthi court.

In Saudi Arabia, justice has not been done against the assassins of journalist Jamal Khashoggi, who was brutally murdered in his country's consulate in Istanbul because of his critical view of his country's politics and his demands for freedom and political and economic reforms. َAlkarama has raised his case, together with other organizations with the UN human rights procedures. His case was brought before the Human Rights Council in the framework of the Universal Periodic Review on November 5, 2018.
On July 5, 2020, the death of journalist Saleh Al-Shehi was announced after he had suffered from illness since his release in May of the same year. Al-Shehi was arrested in 2018 for criticizing corruption in the Royal Court. He was known as a defender of citizens' rights and for his fight against corruption. Sources say he was contaminated by covid-19 while in prison, but ultimately it is up to the Saudi authorities to bear responsibility for his fate.

Journalists in Egypt have faced systematic repression since Marshal Abdel Fattah Al-Sissi came to power, and many journalists are still behind bars, including nine journalists for whom Alkarama informed the UN Working Group on Arbitrary Detention on 19 May 2015, and who were tried before the Cairo criminal court. They were accused of covering the Rab'a sit-in and inciting protesters to confront the state and sow chaos in the country. The journalists were also accused of spreading false rumors accusing the authorities of using excessive force and violating human rights during the violent dispersal by army and security forces of sit-ins in the squares of Rab'a and al-Nahda in Cairo on August 16, 2013. In light of the documented information provided by Alkarama and other organizations to the United Nations Special Procedures, Mr. David Kaye, the Special Rapporteur on the promotion and protection of the right to freedom of opinion and expression, sent a letter to the Egyptian authorities on 6 October 2015. Taking into consideration reports of the Special Procedures submitted at its 31st session, the Human Rights Council expressed concern about the state of freedom of expression in Egypt, in which dozens of journalists have been arrested in recent years. However, despite these condemnations, the Egyptian authorities continue to detain journalists and silence them.

In Algeria, violation of the right to freedom of expression remained a major problem in the country. Examples include the detention of journalist and human rights defender, Khaled Drarni, who was arrested in August 2020 and sentenced to 3 years in prison for filming police officers attacking demonstrators in Algiers. UN experts condemned the decision against him, as well as Fadel Breica of Sahrawi origin and human rights defender, currently in detention, for whom Alkarama has appealed to UN special procedures. Alkarama has also recently called for the repeal of articles in the Algerian penal code that criminalize freedom of expression and association in order to put an end to these practices.
Arab governments systematically attack journalists and bloggers, viewing them as a threat to their stability and security, sometimes insulting those in power, legally harassing them, arbitrarily and secretly detaining and torturing them, and sometimes even going as far as executing them, doing everything in their power to silence those who denounce the violations they commit.
In countries plagued by armed conflict, journalists face greater danger and are vulnerable to reprisals from all parties to the conflict. For example, in countries where the work of journalists and bloggers who criticize their policies is considered to be a security threat, some journalists have been prosecuted and tried on terrorism charges. At a time when the world is witnessing a massive exchange of information, many countries in the region have recently passed strict laws that restrict freedoms and criminalize all peaceful media or online activities.