Egypt: UN Special Rapporteur David Kaye expresses his concern over freedom of expression in the country 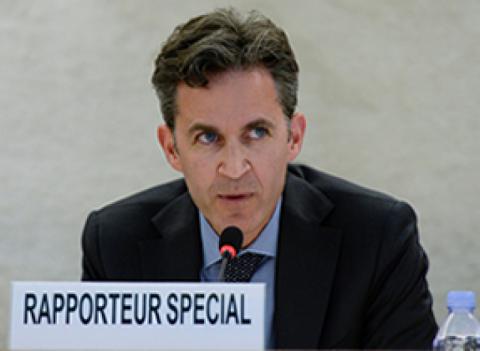 In a letter addressed to the Egyptian authorities and published in the recent communications report of special procedures for the 31st session of the Human Rights Council, David Kaye, the United Nations Special Rapporteur on the promotion and protection of the right to freedom of opinion and expression (SR FREEDEX), voiced his concerns regarding the state of freedom of expression in Egypt, a country where dozens of journalists have been arrested in the past years. Alkarama shares the Special Rapporteur’s point of view and has in fact documented many cases of freedom of expression’s violations in Egypt to UN Special Procedures, such as to the UN Working Group on Enforced or Involuntary Disappearances (WGEID) regarding the disappearance of journalist Sabry Anwar Mohamed Abdelhamid, after his arrest at home on 21 February 2016.

Since the military coup of July 2013, the Egyptian authorities have continuously restricted freedom of expression, be it for journalists and media but also for ordinary citizens. In fact, in November 2013, they adopted the law n°107 of 2013 that severely limited the right to peaceful assembly. Thousands of individuals have been arrested under this law and a majority of them is serving sentences rendered after unfair trials. In this sense, the UN Special Rapporteur on freedom of expression called upon the Egyptian authorities to release “all [individuals] who have been arrested in connection with peaceful protests and exercise of right to freedom of expression.” He subsequently invited the authorities to amend “the Protest Law of 2013 [and bring it] in line with article 73 of the Egyptian Constitution, as well as Egypt’s international human rights obligations.”

The Special Rapporteur also noted “an increasing trend of criminalization of expression and imprisonment of journalists.” If this was true at the time of his letter, dated of 6 October 2015, it is even truer in 2016. More and more journalists are being targeted by the authorities and those who are detained are subjected to ill-treatment and torture, such Hassan Mahmoud Ragab El Kabany, a journalist arrested on 22 January 2015 who was tortured in detention. On the basis of a submission from Alkarama, the UN Special Rapporteurs on Torture and on Freedom of Expression sent a joint urgent appeal to the Egyptian authorities in October 2015 regarding his case.

This “criminalisation of expression” has been further aggravated by the adoption of the anti-terrorism law in August 2015, in spite of the intervention of up to eight UN Special Procedures that invited the authorities to adopt a more clear and balanced legislation. Under it, any journalist that “would publish statements that contradict official statements regarding terrorist attacks can be prosecuted and sentenced to prison and a fine, all the more jeopardising the independence of journalism,” said Rachid Mesli, Alkarama Legal Director.

It is in this context that 44-year-old journalist Sabry Anwar Mohamed Abdelhamid, was arrested by the police and the Security Forces following a raid on his home located in Damietta, a coastal city 160km North of Cairo, on 21 February 2016. This employee of Al Badil, an information website, has been missing since and the authorities have constantly denied his detention. His family fears that he could be tortured while in secret detention, a recurrent practice in Egypt such as in the case of Mohammed Ali Hassan, a journalist tortured in detention in December 2014 and who has been released on bail since.

Alkarama calls upon the authorities to take disclose the Sabry Anwar Mohamed Abdelhamid’s place of detention and to authorise his family and lawyer to visit him immediately. Alkarama invites the authorities to take effective measures to guarantee that everyone can freely express his/her opinions without risking arrest, and to release all journalists who are currently detained.