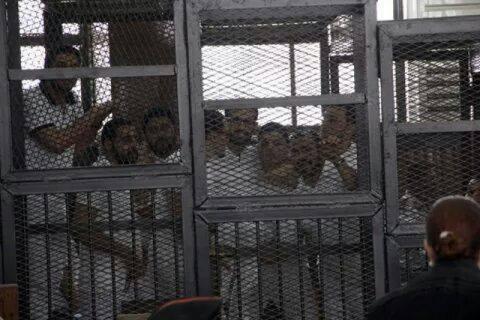 The nine journalists were sentenced together with 42 other defendants – including Muslim Brotherhood spiritual leader, Mohamed Badie and Egyptian-American activist, Mohamed Soltan – for having allegedly formed a group during the Rabaa Al Adawiya sit-in and to have given orders to the protesters to spread chaos around the country.

The journalists were also accused of having "fabricate[d] pictures and scenes that imply fatalities and injuries among demonstrators, prepare[d] statements in foreign languages and publish[ed] all of this outside Egypt to imply that security forces used excessive force and violated human rights" during the violent dispersal of the Rabaa Al Adawiya and El Nahda Squares in Cairo by the army and the police on 16 August 2013, when the journalists had only depicted the events as they had witnessed them.

In fact, the United Nations High Commissioner for Human Rights, Navi Pillay had already denounced on 15 August 2013 the "excessive, even extreme, use of force against demonstrators" and called upon the Egyptian authorities to carry out an "independent, impartial, effective and credible investigation of the conduct of the security forces" and hold "anyone guilty of wrongdoing to account" – which the authorities have failed to do to date – together with several human rights organisations, including Alkarama, which were qualifying the violations committed as crimes against humanity.

To the exception of Mosaad Albarbary, who was arrested on 2 April 2014 by the Lebanese security forces while he was in Beirut before being deported to Cairo the following week where the authorities faked an official arrest, the eight other journalists were arrested in the days or months following the Rabaa Square massacre. All were arrested without any warrant being shown, and none was explained the reasons behind their specific arrests before being put in custody either in police stations or security forces facilities.

During their long months of incommunicado detention, they were regularly subjected to torture, humiliated and threatened by guards. Among other ordeals suffered, Hani Salheddin and Abdullah Alfakharany, both held in Tora prison, told the public prosecutor that dogs had been brought inside their cells to threaten the prisoners. Youssouf Abdulkarim reported being subjected to such torture by the security forces that he couldn't stand up anymore and kept on fainting because of the pain. He has not been granted the right to see a doctor since. Others told their relatives that they had been put into solitary confinement, without food or a mattress, and that guards stormed their cells to confiscate their clothes, leaving them naked and alone.

None of the different reports of severe torture they made to the public prosecutor were taken into account; to the contrary, some of them were ill-treated even further in retaliation against their denunciations.

"These men have been subjected to particularly vicious acts of torture and ill-treatment for the sole reason of having exercised their work independently and with a critic eye," said Alkarama's Legal Director, Rachid Mesli. "Instead of promoting the freedom of expression that they pretend to respect, the authorities continue to show that anyone who stands against them is at risk of unlawful arrest and torture, including children, if not of enforced disappearances," he continued. "Egypt clearly bears all the characteristics of a violent authoritarian regime that uses the legal and judicial system to its benefit and against its citizens."

Their trial begun on 1 April 2014 and was often postponed under vague motives until the Court came to a verdict a year later on 11 April 2015 and sentenced eight of them to life in prison and one to death. In addition to their conditions of detention, their trial did not meet the requirements of international fair trial norms, as guaranteed by the International Covenant on Civil and Political Rights (ICCPR).

The nine men were denied the right to challenge the lawfulness of their detentions and the judges partially based their ruling on secret evidence from the intelligence services, whose veracity was therefore impossible to challenge. Some of the journalists were not even inside the court room when the sentences were read, which could be assimilated as being tried in absentia.

It is in these circumstances that Alkarama sent a communication to the WGAD asking it to recognise the arbitrary character the nine men's deprivation of liberty and to consequently urge the Egyptian authorities to immediately release the journalists. In addition to launching an independent and impartial commission of inquiry into the crime against humanity perpetrated on 16 August 2013 on Rabaa Al Adawiya and El Nahda Square, the authorities should ensure that freedom of expression is fully and freely enjoyed by all citizens in Egypt by:
• Releasing all journalists, human rights defenders and political opponents;
• Stopping the censorship and harassment against newspapers;
• Repealing the law on demonstrations of 2013.