Yemen: five journalists regain their freedom after years of arbitrary detention and torture 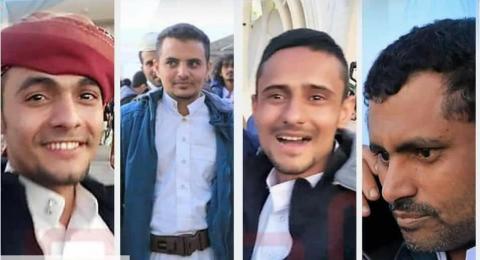 Yesterday, Thursday, October 15, 2020, five Yemeni journalists detained in the prisons of the Houthi group, Ansar Allah, were released in Sanaa as part of an agreement to exchange prisoners and kidnappers concluded under the auspices of the United Nations and of the International Committee of the Red Cross between the Houthi group and the recognized Yemeni government and Saudi Arabia, comprising 1081 prisoners while many journalists and other political activists remain in detention, including four journalists who were executed by a court Houthi following a show trial in which the levels of justice, legality and impartiality were at an all-time low.
The five  released are: Hisham Tarmoom, Hisham Al-Youssoufi, Haitham Al Shihab, Essam Balghith and Hassan Anab, while four of their colleagues are still in prison. To this day, the Houthis still refuse to release or trade them: Abdul Khaliq Amrane, Akram Al-Walidi, Harith Hamid and Tawfiq Al Mansouri.
Alkarama has been monitoring the case of theseYemeni journalists for years and corresponded   with the United Nations special procedures office, submitting on September 3, 2015, an urgent appeal to the United Nations Working Group on Arbitrary Detention concerning the nine journalists, aged 23 to 31, who were kidnapped by Houthi gunmen from the Palace Hotel Al-Ahlam in the capital Sana'a on June 9, 2015. They had been taken to an unknown destination, before appearing in various prisons, then revealing to their families that they had been subjected to terrible torture and ill-treatment, and had been kidnapped because of their activities of documenting situations of human rights violations.
Back then, Alkarama expressed its fear that this abduction was a revenge against them for documenting human rights violations committed by the Houthis, calling on all parties to the conflict to understand that enforced disappearance is a serious violation of international humanitarian and human rights law and that this practice cannot be justified under any circumstances and in any situation.
The Houthi forces had abducted:
Abdul Khaleq Amrane, Akram Al-Walidi, Harith Hamid, Hassan Enab, Hisham Al-Youssoufi, Hisham Tarmoom, Haitham Al-Shehab, Issam Balghith, Tawfiq Al-Mansouri, and took them to Al-Ahmar police station in Al-Hasaba, then transferred them on July 3, 2015 to the counter-terrorism unit of the Criminal Investigation Department of the Ministry of Interior's Al-Adl Street, which is under the control of the Houthis, where they were held incommunicado before being transferred to an unknown destination.
It was later revealed that they were being held in the Political Security (Intelligence) Prison and that after years of detention, enforced disappearance and torture against them, they were brought to justice and four of them were sentenced to death.
The Yemeni journalists issue, victims of enforced disappearances has generated a strong reaction.  The Yemeni Journalists Union, a member of the International Federation of Journalists and Yemeni civil society organizations have called for their release, and the families of the victims have simultaneously organized numerous demonstrations and filed complaints with the UN Special Envoy to Yemen, but to no avail.
The disappeared journalists also repeatedly announced an open hunger strike in the Houthi-Saleh coalition prisons in the capital, Sana'a, to protest the torture and attacks they face inside the prison, but authorities responded to their demands with repression, intimidation, and mistreatment.
Alkarama reiterates its call for the immediate release of the journalists still detained and all political activists who have been abducted and arbitrarily detained by the various parties to the bloody conflict in Yemen.