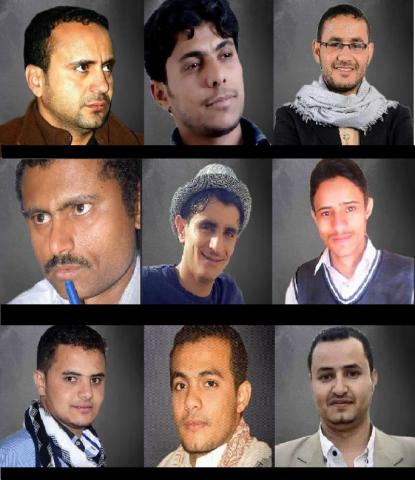 On 3 September 2015, Alkarama sent and urgent appeal to the United Nations Working Group on Arbitrary Detention (WGAD) regarding the case of nine media workers abducted by armed Houthi forces from Sana'a's Dream Castle Hotel on 9 June 2015 and disappeared since their transfer to an unknown location the following month. It is suspected that the reason behind the victims' abduction is that all of them had previously documented human rights violations committed by Houthi forces.

Aged between 23 to 31, the nine victims − Abdul Khaliq Amran, Akram Al Walidi, Harith Hamid, Hassan Anab, Hisham Al Youssoufi, Hisham Tarmoom, Haitham Al Shihab, Essam Balghith, Tawfiq Al Mansouri (pictured from left to right and top to bootom) − were first taken to the Red Police Department in Sana'a's Al Hasba district which is under the authority of the Houthis forces. They were then transferred, on 3 July, to the Anti-Terrorism Unit of the Department of Criminal Investigation − controlled by the Ministry of Interior, also under Houthi control − where they were held incommunicado until 12 July before being moved to an unknown location.

"We fear that this abduction might have been a direct retaliation for documenting and reporting violations committed by Houthis forces," said Khadidja Nemar, Regional Legal Officer for the Gulf at Alkarama. "It is important that all actors understand that enforced disappearance constitutes a serious violation under both humanitarian and human rights law and that no circumstances whatsoever can justify such a practice which can amount to torture if done with the intent of punishing, intimidating or extorting information."

Following the nine men's abduction, the Yemeni Journalists Syndicate (YJS), an affiliate of the International Federation of Journalists (IFJ), issued several appeals asking the Houthi forces to release them, but to no avail. At the same time, the families of the abducted men sent complaints to several international organisations as well as a written complaint to the UN Special Envoy to Yemen in Sana'a, while YJS organised a campaign to demand the victims' release in association with the victims' families. On 1 July 2015, all Yemeni organisations defending democratic rights and freedoms joined in the campaign, publishing a joint statement calling for their release. Despite all the steps taken, however, the nine media workers' fates and whereabouts remain unknown to date.

In view of the facts and the impossibility for the victims' families to obtain remedy at the national level, Alkarama seized the Working Group on Arbitrary Detention (WGAD) asking this Special Procedure of the UN Human Rights Council (HRC) to call upon the Houthi forces to immediately release the men they abducted or, at the very least, to ensure that their fundamental rights are respected, their whereabouts disclosed and their families allowed to visit them without restriction.

Concerned over the violations committed by the Houthis forces and by all actors in Yemen, and recalling that the systematic practice of disappearance constitutes a crime against humanity, Alkarama calls on all parties to the conflict, including the Saudi-led coalition, to put an end to this practice and to all other widespread violations of human rights, especially by: