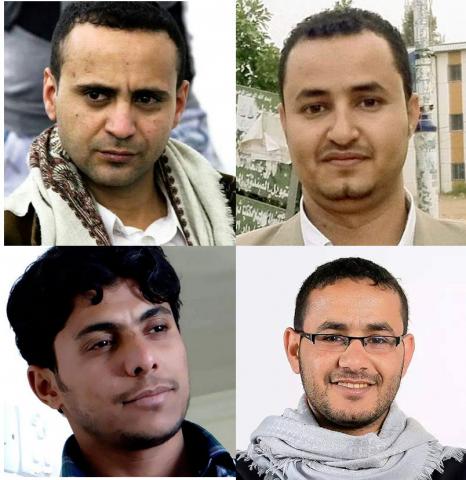 The Houthi-controlled Specialized Criminal Court issued a death sentence against journalists Abd al-Khaleq Imran, Tawfiq al-Mansuri, Harith Hamid, Akram al-Walidi. It also issued prison sentences against  six other journalists: Salah al-Qadi, Hassan Annab, Haitham al-Shehab, Hisham Tarmum, and Hisham al-Yousifi , Issam Belghith. All
The Houthi court's decision comes five years after the kidnapping and disappearance of the journalists in Sana'a, and their exposure to torture and inhumane conditions of detention, according to testimonies from their families.
On September 3, 2015, Alkarama sent an urgent appeal to the United Nations Working Group on Arbitrary Detention, regarding nine journalists, aged between 23 and 31, who were kidnapped by Houthi gunmen from Sana'a's Dream Castle Hotel, on June 9, 2015, and took them to an unknown destination. The kidnapped reappeared later in a Houthi controlled prison. It appears that the reason for the kidnapping of the nine journalists is their activity in documenting human rights violations.
Alkarama then expressed its fear that this kidnapping would be in retaliation for documenting human rights violations committed by the Houthis, and reminded all parties to the Yemeni conflict that enforced disappearance is a gross violation of humanitarian and international human rights laws and that this practice cannot be justified whatever the circumstances and conditions.
Alkarama then notified the United Nations Working Group on Arbitrary Detention about the case, while calling on the Houthi forces to immediately disclose their place of detention and asked for their immediate release. Evidence shows that the journalists were actually transferred between many prisons and clear traces of torture were visible on them. They were eventually detained in the Houthi Political Security Prison.
In April 2018, the Judicial Council of the internationally recognized Yemeni government issued a decision to revoke the powers of the Criminal Court in Sana'a and to establish a specialized criminal court in Ma’rib that would assume its powers, following the Houthis' take over of the courts and their use to issue death sentences against journalists and political opponents.
Alkarama reminds that the practice of enforced disappearance is a crime against humanity, and calls on all parties to the conflict in Yemen, including the Saudi-led coalition forces to desist from committing grave human rights violations, and respect the principles of international human rights and humanitarian laws. Alkarama also insists that all parties take the necessary measures to end arbitrary detention and ensure the physical and mental integrity of all detainees.
Alkarama urges all parties to respond to calls for the release of all those arbitrarily detained in Yemen as part of preventive measures to combat the Corona outbreak, and to open serious investigations into all violations, including secret detention. All parties should also prosecute all those involved in gross violations of human rights, and provide adequate compensation to victims, and ensure that violations are not repeated.
Alkarama also decided to notify the United Nations special mechanisms regarding these new developments, in particular the Special Rapporteur on extrajudicial, summary or arbitrary executions.