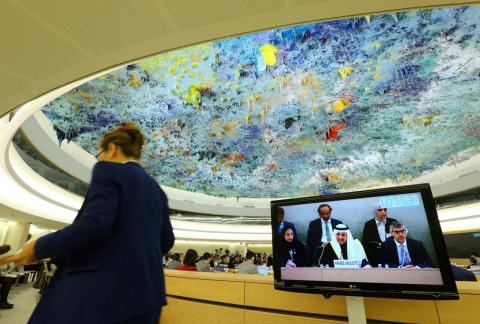 On November 9, 2018, the United Nations Working Group on the Universal Periodic Review (UPR) adopted a draft report following the review of Saudi Arabia’s human rights record on November 5, 2018. The report contains 258 recommendations made by United Nations Member States to Saudi Arabia, related to issues including the application of the death penalty after severely flawed trials that even applies to minors, as well as the male guardianship system and the crackdown against activists, journalists and human rights defenders for making use of their fundamental right to freedom of expression.

During the review, states assessed Saudi Arabia’s human rights record, expressing concern over a large number of issues, most notably the use of the death penalty; restrictions to the rights to freedom of expression, press and peaceful assembly; violations in the context of counter-terrorism as well as breaches of international human rights and humanitarian law by the Saudi-led coalition in the conflict in Yemen. Several recommendations were also issued calling on Saudi Arabia to accede to fundamental human rights conventions, such as the International Covenant on Civil and Political Rights (ICCPR), the Optional Protocol on the Convention against Torture (OPCAT) and the International Convention for the Protection of All Persons from Enforced Disappearance (ICCPED). Alkarama previously raised all these issues in its report submitted to the Human Rights Council (HRC) in March 2018, ahead of Saudi Arabia’s review.

Moreover, the recent case of the killing of Saudi journalist Jamal Khashoggi after he entered the Saudi Consulate in Istanbul on October 2, 2018 took centre stage during the review. The majority of the recommendations issued in this regard called for a prompt and thorough independent investigation into the killing.

Since the last UPR, Saudi Arabia’s use of the death penalty has increased, with the number of executions doubling between 2013 and 2015. Moreover, Saudi courts continue to issue death sentences following severely flawed trials, including for non-violent offences that do not meet the threshold of “most serious crimes”. The Saudi authorities also continue to pronounce the death penalty for individuals under the age of 18.

Deprivation of liberty for making use of fundamental rights

Domestic legislation in Saudi Arabia criminalises peaceful dissent. Arbitrary detention has been practised systematically by the Saudi authorities to silence human rights defenders, lawyers, academics, and others critical of the government. In particular since the promotion of Mohammed bin Salman to the position of crown prince in June 2017, large waves of arrests have swept across the country. Hundreds of individuals, including businessmen, members of the royal family, scholars, academics as well as male and female human rights defenders have been deprived of their liberty under the pretext of “fighting corruption” and “protecting national security”.

During the UPR, a large number of recommendations were issued on the protection and promotion of a free press and fundamental rights. Sweden, France and the Czech Republic, amongst others, recommended that the Saudi authorities amend legislation on freedom of speech and peaceful assembly and association, such as the Anti-Cybercrime Law and the Law on Associations, to bring it into line with international standards. Many others called for the release of prisoners of conscience and those imprisoned for making use of their right to freedom of expression. Among them, Switzerland and Germany recommended that Saudi Arabia guarantee the right to freedom of expression, peaceful assembly and association for everyone, guarantee the safety of journalists and review the judgements of those convicted for freely expressing their opinion, and protect human rights defenders from intimidation, threats and arbitrary arrests. France also requested that Saudi Arabia put an immediate end to the arbitrary imprisonment and arrests of journalists and human rights defenders.

Violations in the context of counter-terrorism

Fundamental rights and freedoms continue to be systematically violated in Saudi Arabia under the pretext of fighting terrorism. The Specialised Criminal Court set up in 2008 has been increasingly used to prosecute acts of peaceful dissent in proceedings that violate fair trial rights. Additionally, the 2017 Law on Combating Crimes of Terrorism and its Financing contains an extremely vague definition of terrorism, lacks legal certainty, and criminalises a wide spectrum of acts falling under the rights to freedom of expression, peaceful assembly and association.

During the UPR, seven recommendations were issued on human rights and counter-terrorism, including by Canada, the United States of America and Austria. These recommendations contained specific demands to respect legal safeguards, such as prohibiting incommunicado detention in law and abolishing the Public Prosecutor’s discretion to forbid a detainee’s access to a lawyer. Furthermore, Norway called on Saudi Arabia to ensure that the country’s counter-terrorism legislation complies with international norms, including by revising the broad definition of terrorism, and no longer making it applicable to non-violent expression.

Overall, Saudi Arabia received 258 recommendations from 96 UN Member States, which it must consider before March 2019, and inform the Human Rights Council of whether it will accept or reject the recommendations. The state should then implement the accepted recommendations before its fourth UPR cycle in 2022 in order to improve the human rights situation on the ground.