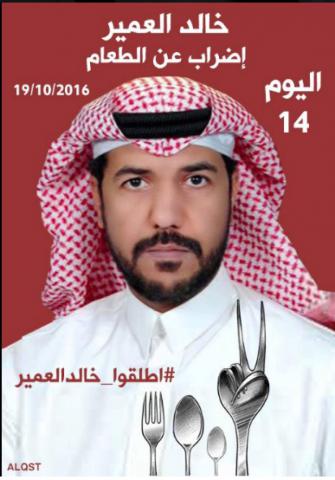 On 5 October 2016, Al Omeir’s eight year sentence for “attempted illegal gathering” and “publishing information online” legally expired. However, Al Omeir has not yet been released and he has begun a hunger strike protesting the Saudi authorities’ refusal to release him. Hence, on 17 October 2016, Alkarama seized the Working Group on Arbitrary Detention (WGAD) – which had already deemed his detention to be arbitrary in 2013 – to inform them of the continued illegal detention of Khaled Al Omeir and urging his immediate release.

Khaled Al Omeir was arrested on 1 January 2009 for having called for a protest against the Israeli bombing of civilians in Gaza. Alkarama had then seized the UN Special Procedures, following which the WGAD and Special Rapporteurs on the Independence of Judges and Lawyers (SR IJL), on torture and other cruel, inhuman or degrading treatment (SRT), on the situation of human rights defenders (SR HRD) and on the promotion and protection of the right to freedom of opinion and expression (SR FRDX) sent an Urgent Appeal to the Saudi government. The latter responded by claiming that Al Omeir “was detained on a security-related charge that necessitated his remand in custody for questioning, and that he would be referred to the judiciary to determine the legal measures to be taken against him.” The government added that “throughout the period of his detention, he has been treated in accordance with the Kingdom’s judicial regulations, derived from Islamic Shari’a, under which human rights and international covenants and conventions are in this regard respected.”

Despite these assurances, Al Omeir was detained for more than two years before any legal proceedings began. In 2011, he was sentenced by the Specialised Criminal Court (SCC) to eight years in prison for “attempted illegal gathering” and “publishing information online”. He was not allowed access to a lawyer and did not have any opportunity to appeal the sentence. Moreover, the trial was not public and the SCC cannot be considered as an independent tribunal, as it is under the direct supervision of the Ministry of Interior.

Disregarding the WGAD’s 2013 request for Al Omeir’s immediate release, the Saudi authorities executed Al Omeir’s sentence in full. It is with great concern that we see Khaled Al Omeir has been detained for more than eight years solely for his peaceful calls to protest. As of 5 October 2016, he is being held without any judicial basis and has therefore begun a hunger strike protesting his illegal detention.