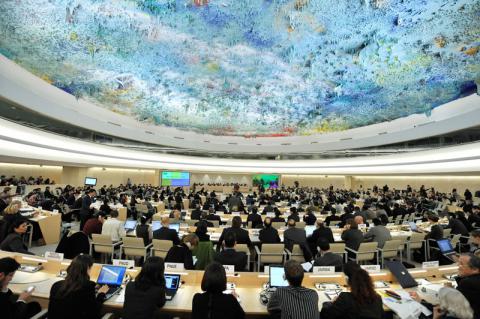 On 21 September 2016, the final outcome of Sudan's Universal Periodic Review (UPR), that took place on 4 May 2016, was adopted by the United Nations Human Rights Council (HRC). This consideration was the occasion for UN Member States and civil society organisations to raise their concerns over Sudan's human rights situation, in particular the State's failure to implement the majority of the recommendations accepted during the first cycle of the UPR in 2011.

Amongst the concerns that have been voiced were the refusal to accept visits from all Human Rights Council's Special Procedures (SPs), the revision of various national laws – including the 2010 National Security Act – that provides immunity to members of the Security Services, and the impunity and lack of transparency of law enforcement agencies in relation to allegations of ill-treatment and torture. All these issues had been previously raised by Alkarama in its September 2015's report in view of the Sudan's second UPR.

Lack of credible actions in support of human rights, constitutional and legislative frameworks

During the adoption of Sudan's UPR outcome, various States and civil society organisations criticised the authorities for having already failed to implement the vast majority of recommendations that were put forward during Sudan's first UPR in 2011. While, on the one hand, the State of Sudan reiterated its commitment to human rights and said that it was "willing to adopt legal reforms" and "amend aspects of the Constitution in line with international human rights standards", on the other it merely agreed to consider a revision of domestic laws in conformity with these standards and to only 'consider' the ratification of human rights instruments, such as the International Convention for the Protection of All Persons from Enforced Disappearance (ICPPED) and the Convention against Torture (UNCAT).

In light of these facts, the Japanese delegation recommended to "re-examine areas of its legislation that have led to restrict political freedom and freedom of expression, arbitrary arrests, detention, executions and torture".

International obligations and cooperation with the human rights mechanisms

Despite Sudan having signed the UNCAT in 1986, it never ratified this instrument. During the second UPR, however, the State of Sudan accepted several recommendations from UN Member States with regards to the ratification of human rights treaties. While on the one hand, Sudan accepted to "consider" ratifying the Optional Protocol to the UNCAT (OPCAT), it inconsistently rejected the recommendation to ratify it. In addition, although Sudan's State delegation reiterated its alleged "openness to collaborate with the UN human rights mechanisms", it rejected the recommendation to respond positively to all standing invitations to the country of the Special Procedures.

The practice of torture remains widespread in the country and is further favoured by national laws – such as the 2010 National Security Act, but also the 2007 Armed Forces Act and the 2008 Police Act – which provide law enforcement personnel with immunity. As such, Sudan rejected five recommendations to amend or revise the 2010 National Security Act, thus casting doubts on the State's genuine commitment to eradicate torture. Instead, Sudan accepted 32 recommendations merely recommending to "find local remedies against torture".

An amendment introduced in 2013 to the 2007 Armed Forces Act extended the jurisdiction of Sudanese military tribunals to try civilians. As a consequence, civilians are brought before these military trials and subjected to grossly unfair trials, due to their lack of independence and impartiality. Alkarama regrets that no recommendation was formulated during Sudan's UPR in this regard, despite mention of this alarming practice in Alkarama's report. Only one general recommendation was made by Burkina Faso, calling for the improvement of the independence of the judiciary.

Freedom of opinion and expression, and right to peaceful assembly and association

Sudan accepted various recommendations put forward during the review aiming at guaranteeing the exercise of the freedom of expression and opinion, and the right to peaceful assembly and association. Furthermore, on 21 September 2016, Sudan reiterated its alleged commitment to "ensure a safe environment to political opponents, journalists, civil society organisations and human rights defenders", which however is in contracting with the brutal crackdowns on peaceful demonstrators and opponents in May 2016 and the travel ban imposed in April 2016 on human rights activists to impede them from attending the UPR of Sudan.

Sudan received 244 recommendations from UN member States, which the country has to implement before the third UPR of Sudan which will be held in 2021. The State of Sudan should then implement the accepted recommendations so as to improve its general human rights situation.

Alkarama remains however deeply concerned that most recommendations put forward in 2011, during the first UPR, were not implemented and therefore that new recommendations will not be effectively applied despite the State's reassuring declarations.