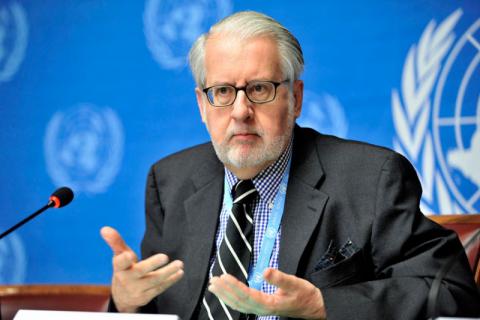 In March 2015, Ammar Al Hasan, a 20-year-old student detained in Al Malikiyah prison – one of the central Kurdish prisons in north-eastern Syria – was transferred to an unknown detention centre and subsequently disappeared. The Kurdish authorities have refused to provide any information about his whereabouts, and his family was never informed of the location he was brought to. His relatives therefore turned to Alkarama and Human Rights Guardians, who referred Al Hasan's case to the Independent International Commission of Inquiry on the Syrian Arab Republic (CoI Syria) on 23 December 2015.

On 14 February 2015, Al Hasan was in Jazah – a village situated at about 100 kilometres east of Hasakah town near the Iraqi border – when forces belonging to the People's Protection Units (YPG), the main armed forces of Syrian Kurdistan, raided the village and arrested him. According to the witnesses, the forces wore uniforms belonging to the YPG and spoke Kurdish.

Following his arrest, Al Hasan was taken to Al Malikiyah prison, where his family could visit him regularly until March 2015, when he was transferred to an unknown location. Despite his relatives' demands, the authorities never provided any information on Al Hasan's fate. They fear that he might have been transferred to a secret detention facility, whose existence is denounced by opposition activists and some lawyers. Left with no other recourse, Al Hasan relatives contacted Alkarama and Human Rights Guardians hoping the two human rights organisatons could help locate him.

"The case of Al Hasan is sadly another example of the different human rights violations committed by Kurdish forces within the context of the fight against terrorism and the Islamic State (IS)," comments Inès Osman, Alkarama's Legal Officer for the Mashreq. "The YPG has a legal and moral duty to put an end to these practices: international humanitarian and human rights law must be respected, and all the more so since the Charter of the Social Contract – the constitutional law adopted in January 2014 by the Kurdish authorities – foresees the applicability of international human rights instruments to the Kurdish administered territories."

Alkarama and Human Rights Guardians thus referred Al Hasan case to the CoI Syria established by a Resolution of the Human Rights Council on 22 August 2011 to investigate "all alleged violations of international human rights law [in Syria] since March 2011" and to ensure that "perpetrators of violations, including those that may constitute a crime against humanity, are held accountable."