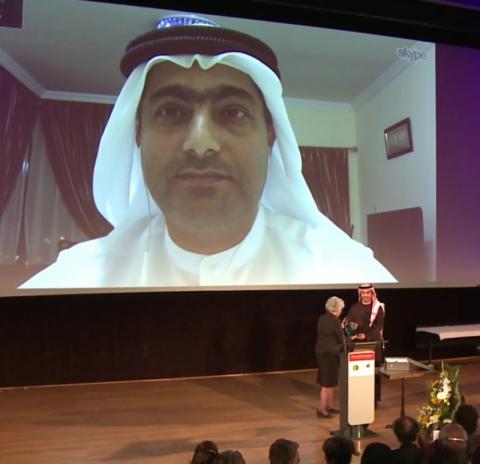 Alkarama welcomes the selection, on 6 October 2015, of Emirati human rights defender Ahmed Mansoor as laureate of the 2015 Martin Ennals Award in recognition of his work providing credible and independent assessment of the human rights situation in the country.

An eminent human rights defender (HRD) advocating for individual freedoms in the United Arab Emirates, Mansoor has constantly expressed his political opinions and called for reforms on social media and web forums. His work has made him the victim of numerous reprisals by the Emirati authorities, as documented by Alkarama on numerous occasions. In 2011, he and four others human rights defenders were found guilty of having "publicly insulted the Head of the State" following an unfair trial that took place after their detention had been considered arbitrary by the UN Working Group on Arbitrary Detention (WGAD). Ahmed and the other activists were later pardoned, but reprisals continued, as the authorities retained their passports. Since then, Ahmed was the victim of numerous reprisals, including a recent a ban on travelling.

Speaking to Alkarama, Mansoor said he "was arrested on 8 April 2011, after an unprecedented smear campaign in the UAE. The campaign included fabricating false videos and stories about me, publishing those fabrications in websites created and dedicated for this purpose and circulating hatred messages on social media," adding that "prior and during my arrest I received several death threats, none of which were investigated and no one was held accountable. After my release, they refused to give me my passport, I lost my job, faced several smear and hatred campaigns, some of which instigated people to kill me. I was assaulted twice at the university."

In 2014, the UN Secretary General (UNSG) recognised the reprisals against Mansoor in his report on reprisals against human rights defenders, according to which Mansoor "has allegedly been under surveillance, his e-mail account has been accessed without authorization and he was physically attacked twice." Despite such intimidation and harassment, Ahmed never stopped advocating for human rights in his country, which is why his efforts and determination were recognised by the jury of the Martin Ennals Award, created in 1993 to recognise, encourage and protect HRDs who have "demonstrated an exceptional record of combating human rights violations by courageous and innovative means," as well as HRDs "who are at risk and therefore in need of immediate protection."

"We are very happy that Ahmed Mansoor was selected for this award and we hope that it will enhance the protection he needs and the recognition he deserves," said Radidja Nemar, Regional Legal Officer for the Gulf at Alkarama. "The reprisals that he and so many other rights activists, professors and lawyers have been subjected to by the UAE authorities should not continue unchecked".

In the UAE, government critics and human rights defenders are constantly victims of harassment and reprisals. In the past years, Alkarama documented cases of activists who were disappeared, tortured and arbitrarily detained by Emirati forces. Considering the systematic repression of human rights activists and the widespread use of torture and secret detention in the UAE, which was mentioned by the former Special Rapporteur on the Independence of judges and lawyers (SR IJL), Gabriela Knaul, in her May 2015 report, Alkarama calls upon the Emirati authorities to: