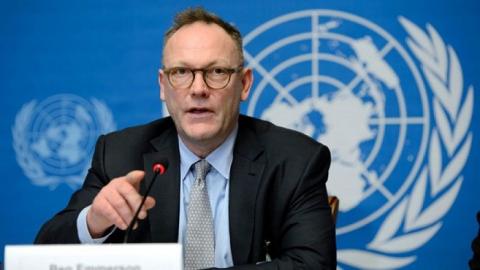 On June 6, 2018, the report of former United Nations Special Rapporteur on the promotion and protection of human rights and fundamental freedoms while countering terrorism (SRCT), Ben Emmerson, was published following his country visit to Saudi Arabia between April 30 and May 4, 2017. In his report, he provides a detailed account of the many shortcomings of Saudi Arabia’s counter-terrorism framework and makes recommendations. Alkarama assisted the team of the Special Rapporteur prior and throughout their visit by providing relevant information on legal shortcomings and human rights violations committed in the context of counter-terrorism.

In the report, the Rapporteur expressed overall disappointment about the government’s lack of genuine and constructive engagement on the most serious issues of concern paired with “blanket denials, bland reassurances and invocations of its own interpretation of the Sharia to justify its actions”. He also criticised the government for taking him to carefully selected showcase facilities rather than allowing him private interviews with a list prisoners he requested to see.

As a member of the UN Human Rights Council, Emmerson reminded the Saudi government of its obligations to uphold the highest standards of human rights protection in order not to undermine or threaten the credibility of the Council itself and its global reputation.

In his preliminary statement, published shortly after his visit, Emmerson raised the issue of the unacceptably broad definition of terrorism in the 2014 Anti-Terrorism Law that criminalises any peaceful expression of opinion or belief deemed to endangering “national unity” or undermining “the reputation or position of the State”. He voiced concern that a large number of peaceful activists and human rights defenders, such as members of the Saudi Civil and Political Rights Association (ACPRA), Waleed Abu Al Khair and others, were prosecuted under this law and sentenced to heavy prison terms for their peaceful activism.

After the Special Rapporteur’s visit, on October 31, 2017, the Saudi Council of Ministers adopted a new Law on Combating Terrorism and its Financing. Instead of incorporating the recommendations made by the Special Rapporteur to bring the law in line with international standards, the Saudi government adopted an ever more draconian counter-terrorism legislation, enlarging their repressive crackdown on everyone making use of their internationally protected civil and political rights. Moreover, the law grants large discretionary powers to conduct “search, investigation, seizure, criminal and administrative prosecution” to the recently established Presidency of State Security, an all-encompassing security agency, which reports directly to the King.

In his report, the former UN expert affirms that individuals charged with terrorist offences in Saudi Arabia are regularly subjected to lengthy periods of pre-trial detention, during which they often become victims of torture or ill-treatment. In addition, he reiterates concerns previously made by the UN Committee against Torture (CAT) after its review of Saudi Arabia in 2016 over the lack of independence of Saudi Arabia’s Specialised Criminal Court, a jurisdiction competent to try cases of state security and terrorism. Emmerson asserts that while the court initially tried cases of political violence linked to Al Qaeda, for the last eight years it has increasingly been used for the prosecution of human rights and political activists.

Proceedings before this court are marked by systematic violations of fair trial guarantees, as trials are held in secret, defendants are denied access to legal counsel, statements extracted under torture are admitted as sole evidence at court and no investigations are opened into allegations of torture. Emmerson concludes that Saudi Arabia’s failure to provide minimum procedural safeguards during detention and interrogation, and its judicial practice of admitting coerced confessions into evidence, strongly suggests that the practice is officially endorsed.

The Special Rapporteur expresses deep concern over the use of the death penalty for minors, people with psycho-social disabilities and peaceful activists after manifestly unfair trials. Hence, he urges the Saudi authorities to review all current cases in which prisoners accused and sentenced for terrorism are facing the death penalty in order to ensure the international minimum standards are met in each case and that the death sentence only be imposed for the most serious crimes resulting in the loss of life.

Moreover, Emmerson considers that Saudi Arabia’s use of the death penalty, which includes methods such as stoning and beheadings (by a swordsman) followed by crucifixion, is archaic, inhumane and degrading not only to the person who is executed but to all who contribute to it and those who take part as spectators. Therefore, he recommends that the Saudi government establish a moratorium on the death penalty or at the very least find methods that do not glorify public mutilation, humiliation and degradation of all individuals involved.

The former UN expert also visited the Mohamed Bin Naif Counselling and Care Center that houses prisoners convicted of terrorism who are nearing the end of their sentence. The Special Rapporteur was impressed with the professional rehabilitation and re-integration programmes, but drew attention to the alarming trend of peaceful dissidents and human rights defenders being administratively detained in such “de-radicalization” centres without the possibility to legally challenge their detention and after the termination of their full prison sentences. Thus, he recommends to the Saudi authorities to introduce legislation to ensure that in all cases where a counter-radicalisation rehabilitation programme leads to a deprivation of liberty, it is authorised and supervised by an independent and impartial judicial authority.

The Special Rapporteur recalls that all parties to the conflict in Yemen, including Saudi Arabia, are obliged to respect the applicable rules of international humanitarian law, including the principles of precaution, distinction and proportionality. The Special Rapporteur calls for greater transparency and on the Saudi government to ensure that a fact-finding investigation, independent of the chain of command involved in air-strikes, is conducted and made public in any case involving civilian injuries and fatal casualties.