Saudi Arabia: Committee against Torture presents its Concluding Observations and Alkarama launches a program for monitoring their implementation 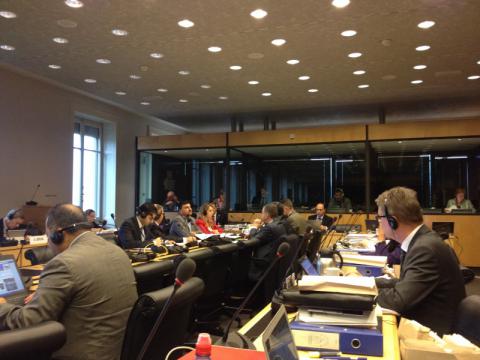 The Committee against Torture has, on 13 May 2016, published its Concluding Observations in response to Saudi Arabia's second periodic report (CAT/C/SAU/2) and review sessions of 22 and 25 April 2016. In preparation of the review, Alkarama presented the experts of the committee with a list of issues and a shadow report, outlining its evaluation of Saudi Arabia's compliance with the Convention. Alkarama welcomes the Committee's concluding observations which very much reflect the organization's main points of concern.

Investigation and Prosecution of torture

Alerted by Alkarama about the widespread and systematic use of torture and inhumane treatment in Saudi prisons and detention centres, the Committee asks Saudi Arabia to carry out prompt, impartial and effective investigation into allegations of torture. The Committee further recommends that those found to have carried out acts of torture be prosecuted in accordance with the gravity of their acts. Therefore, the CAT urges Saudi Arabia to integrate a definition of torture concordant with the Convention, to explicitly criminalize its use and make the prohibition of torture absolute and non-derogable in its penal law. The Committee reminds the state party that corporal punishments amount to torture and that in accordance with article 14 of the Convention, victims of torture must receive immediate medical care and redress including rehabilitation.

Legal Safeguards before and during Trial

For a decade, Alkarama has submitted to the UN special Rapporteurs and human rights mechanisms hundreds of cases of persons detained arbitrarily, tortured and deprived of their legal guarantees. A list with the names of all these victims has been presented to the experts by Alkarama as an annex to its report.

Disturbed by the lack of legal guarantees for detainees in Saudi Arabia's national legislation and their non-observance in practice, the CAT urges the state party to ensure that any person deprived of their liberty is informed of the charges held against them as well as be brought promptly before a judge and to have access to medical treatment. The Committee also reminds the state party of its obligation to render inadmissible any evidence or statement gathered through coercion or torture. It recommends that the state adopt effective measures to ensure that coerced confessions are invalidated by law and in practice and its perpetrators prosecuted.

The CAT finally reiterates the importance for detainees to have prompt access to a lawyer and to be able to confer with them in confidentiality. Detainees should be able to contact a family member to inform them of their detention and whereabouts. The legal provisions allowing investigators to restrict these rights should be repealed and investigators who do not respect these safeguards should be prosecuted.

The Committee expressed its concern about the anti-terrorism law which contains an "overbroad" definition of terrorism, explicitly allowing for violations of legal safeguards such as incommunicado detention. It has also criticized the lack of independence of the Specialised Criminal Court - established in 2008 to try terrorism cases- from the Ministry of Interior. The Committee recommends that Saudi Arabia amends its definition of terrorism so that its criminalization is as narrow as possible and is not used to prosecute "non-violent expression and advocacy, especially human rights defence." Saudi Arabia should further revise the law to prohibit any restrictions to the legal guarantees of detainees and ensure they have prompt access to a lawyer and a family member. Saudi Arabia is also urged to ensure the independence of the Specialised Criminal Court and to make judges aware of their obligation to consider allegations of torture and render confessions obtained under torture inadmissible.

Finally and in line with previous recommendations, the CAT has expressed concern with regards to the Ministry of Interior Investigation Services - Al Mabahith - and their practice of incommunicado detention as well as prolonged periods of pre-trial detention which effectively deprives detainees of their legal safeguards against torture. It has recommended that the state provide detailed information about the persons held in custody of Al Mabahith and to ensure that an independent body be allowed to monitor Al Mabahith places of detention.

Saudi Arabia has recently unveiled its plan for the years to come with "Vision 2030" which aims at reducing Saudi Arabia's dependency on oil resources. The UN 2030 Sustainable Development Goals (SDG) are for their part unequivocally anchored in human rights. Paragraph 18 of the SDGs provides that the new agenda shall be implemented in a manner consistent with obligations of states under international law. In this sense, Alkarama believes that the achievement of Vision 2030 also requires human rights reforms and broader protection and empowerment of civil society. In order to better target these reforms, Saudi Arabia should consider the recommendations made by the United Nations' Committee against Torture (CAT).

Alkarama calls on the Saudi Arabia to enforce the recommendations made to it on behalf of the CAT and urges the state to establish an Independent Committee of Inquiry to investigate the numerous torture allegations. This body should not be subject to the scrutiny of the Ministry of Interior. Alkarama also reminds Saudi Arabia that it has announced the drafting of a new penal code in its opening statement to the CAT review and urges it to produce a body of law concordant with the Convention against Torture and with the recommendations made by its Committee.

Alkarama further seizes this opportunity to announce the launch of its program for the implementation of these recommendations alongside national civil society. The program will run for the coming four years within which Alkarama, with the help of civil society, will monitor the execution of these recommendations and will submit follow-up reports to the experts of the Committee. Alkarama calls upon members of civil society to support the organisation in this effort to protect and promote human rights.