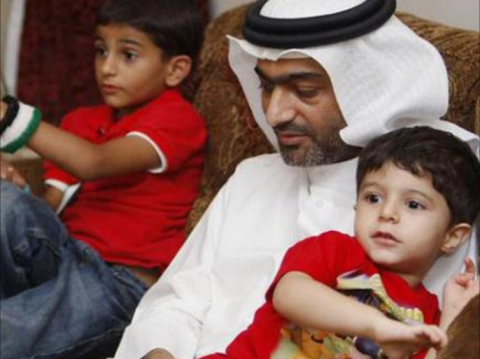 Alkarama expresses its grave concern at reports of the deteriorating state of health of Emirati human rights defender Ahmed Mansoor, who has been detained for nearly four years in very poor conditions. The Emirati authorities are being held responsible for his life and his physical and moral integrity.
Alkarama's Legal Director, Rashid Mesli, said: "Mr Mansoor's life is in real danger, given the bad detention conditions that have led to the deterioration of his health", adding: "Ahmed Mansoor has been arrested several times in the past and has always been harassed by the security apparatus because of his human rights activities". We believe that his peaceful human rights activities and his outspokenness about the human rights situation in his country and in the Middle East, in addition to his participation in numerous conferences, have resulted in his prolonged detention and harsh sentences against him in a trial that does not meet minimum standards of justice.
Alkarama has been following the case of human rights activist Ahmed Mansoor, and on 22 March 2017, filed a complaint with the Special Rapporteur on the situation of human rights defenders at the United Nations, requesting his intervention on this issue.

In preparation for its annual report on reprisals against individuals cooperating with the United Nations, on 1 May 2019, Alkarama sent a report to the UN Secretary General on numerous cases of reprisals in the Arab world, including the case of Emirati human rights activist Ahmed Mansoor.
In turn, the UN Secretary General highlighted, in his reports for the years 2014, 2017 and 2018, the reprisals suffered by Ahmed Mansoor.
On October 4, 2018, the European Parliament adopted a resolution calling for the immediate release of Mr. Ahmed Mansoor, who was sentenced in March 2018 to 10 years in prison on charges directly related to his right to freedom of opinion and expression.
Ahmed Mansoor was arrested on March 20, 2017, for allegedly publishing "false information" and "false news" on social networks for "inciting sectarian conflict and hatred" and "harming the reputation of the state".
At the time of his arrest, Ahmed Mansoor was the last active human rights defender in the UAE. As a result of his work, he has been subject to years of harassment by the authorities, including death threats, surveillance and confiscation of his passport, but he has also suffered physical attacks. He also spent eight months in prison after his arrest in 2011 for "public insult to the head of state".
The European Parliament resolution expressed concern, noting that in recent years there has been an escalation of "attacks against members of civil society in the United Arab Emirates, with the aim of: silencing, detaining and harassing human rights activists, journalists, lawyers and other activists".
The resolution called for the release of Ahmed Mansoor and the annulment of the sentence against him, considering it "an unacceptable violation of freedom of expression and freedom of association and a violation against human rights defenders throughout the United Arab Emirates". This was also included in a statement issued by a number of human rights experts at the United Nations in June 2018. European parliamentarians called for the release of all prisoners of conscience in the United Arab Emirates, including Osama al-Najjar, Nasser bin Ghaith and Muhammad Al-Ruken.
UAE activist Ahmed Mansoor was awarded the Martin Ennals Award for the year 2015 on October 6, 2015 in recognition and gratitude for his work in defending human rights and documenting violations in the country, but this international recognition for Mr. Mansour was met with ingratitude and oppression by his country's authorities and led to further abuse against him while in prison.
Ahmed Mansour, a prominent defender of human rights and individual freedoms in the UAE, has consistently expressed his political views and called for reforms in the country through social media and online forums, but he has ended up being the victim of reprisals by the Emirati authorities, all of which have been documented by Alkarama.

It was about 3 a.m. on April 8, 2011, when a dozen members of the state security forces raided the home of Ahmed Mansoor in the emirate of Ajman. They showed no judicial authorization to carry out the raid, and seized his computer, telephones, and those belonging to the rest of his family, and took him to an unknown destination.
Ahmed Mansoor, along with four other human rights defenders, were arrested and convicted of "public insult to the head of state" in a trial that failed to meet fair trial standards. The UN Working Group on Arbitrary Detention considered their detention to be unjust and described it as "arbitrary". Subsequently an amnesty was granted, but reprisals continued, and authorities confiscated the activists' passports. Since then, Ahmed has suffered numerous reprisals in addition to the amnesty, including one prohibiting him from travel.

Ahmed Mansoor was again arrested in March 2017, and on May 29, 2018, he was sentenced to ten years in prison and three years of supervision at the end of his prison term, in addition to a fine of one million dirhams. On December 31, 2018, the Federal Supreme Court upheld Mansoor's conviction. In March 2019, Ahmed Mansoor began a hunger strike to protest his unfair trial and detention conditions.
Ahmed Mansoor recounts: "I was arrested after an unprecedented smear campaign in the UAE, through which false videos and rumors were spread about me, these slanders were spread on websites created specifically for this purpose, spreading hate messages on social networks". He added: "Before and during my arrest, I received several death threats, none of which were investigated or questioned. After my release, they refused to give me my passport and I lost my job, and I am facing numerous slander and hate campaigns, some of which incite people to kill me. I was even attacked twice at the University."
In 2014, the UN Secretary General, in his report on Human Rights Defenders, referred to the reprisals Mansour suffered, stating that "he was under surveillance and his email was hacked in addition to being physically attacked twice". Despite this intimidation and harassment, Mansour has continued to defend human rights in his country, which is why the jury chose him for the Martin Ennals Award, which was created in 1993 to encourage and protect human rights defenders who "have done distinguished work in the fight against human rights violations" and also "to protect human rights defenders at risk.

The repression of activists

Critics of the government and human rights defenders in the UAE have always been subject to threats and reprisals. In recent years, Alkarama has documented the cases of numerous activists who have been abducted, tortured and arbitrarily arrested by the UAE security services. It should be noted that in her May 2015 report, the Special Rapporteur on the Independence of Judges and Lawyers referred to the systematic repression of human rights activists and the widespread use of torture and secret detention in the UAE.
Many people who have cooperated with Alkarama and human rights organizations throughout the Arab world face intimidation and reprisals, either because of their activism or because their cases are referred to the United Nations. The cases of reprisals mentioned by Alkarama in its report, which include the United Arab Emirates, Iraq and Morocco, represent only the tip of the iceberg, as many of those who have reported reprisals have expressed their desire to keep their testimonies secret for fear of further reprisal.