Mauritania: Submission of Alkarama’s Contribution to the List of Issues to the Committee Against Torture 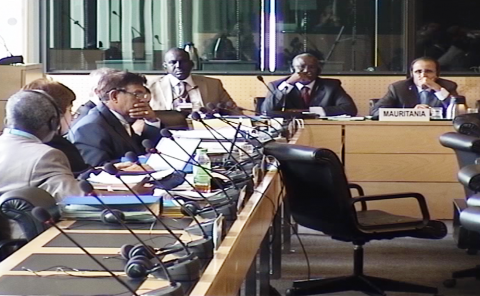 In view of the second periodic review of Mauritania by the Committee against Torture (CAT), Alkarama submitted on 26 June 2017 its contribution to the List of Issues prepared by the Committee’s experts. The list, to the attention of the Mauritanian authorities, is adopted before the review by the Committee next year and highlights the points of the State’s report on which the members seek clarification. The List, as well as the contribution of Alkarama, therefore aim to facilitate the dialogue between the experts and the authorities during the examination.

After reviewing the report submitted to the CAT by Mauritania on 20 February 2017, Alkarama relied on information obtained from the civil society and complaints sent on behalf of victims of violations to recommend the Committee’s members questions to raise during the next review. Alkarama's contribution offers a total of 25 questions on different topics.

Lack of effective implementation of the new law on torture

While Law No. 2015-033 provides for numerous legal guarantees, in particular, the right to access legal counsel from the onset of the arrest, these guarantees are contradicted by the Code of Criminal Procedure. Indeed, Article 58 of the aforesaid code provides that access to legal counsel is only possible after the first extension of the initial period of police custody and upon consent of the Prosecutor. This period can range from 48 hours for ordinary offenses, to 45 days for charges related to terrorism. However, Law No. 2015-033 does not specify whether its provisions take precedence over the articles of the Code of Criminal Procedure and the Anti-Terrorism Law, which are applicable to the police custody system.

The Special Rapporteur on torture had also raised, in his country visit’s report of early 2016, that "although the new law had been in force for several months, prosecutors, members of the judiciary and law enforcement personnel seemed to continue to apply the older provisions, either because they were unaware of the new law or because of misconceptions regarding its application". Alkarama asked whether the authorities were seeing the new law as effectively taking precedence over the articles of the Code of Criminal Procedure and whether measures were taken to ensure that public officials respect this primacy.

This is all the more worrying that Alkarama has documented cases of arbitrary detention and ill-treatments as well as incommunicado detention of anti-slavery activists in June 2016. In those cases, the law enforcement personnel did not respect any of the guarantees listed in Article 4 of Law No. 2015-033. The victims were arrested without warrants, held incommunicado for several days and subjected to ill-treatment. The Security officials also refused to inform their families of their place of detention. Despite a press release by several Special Rapporteurs, two of these activists remained in detention at the Birmoghrein Prison, located 1200 km from Nouakchott in the desert. Alkarama asked whether measures were taken to put an end to such violations and to provide reparation to victims.

While in principle prosecutors are required to investigate allegations of torture and ill-treatment, the number of complaints being prosecuted is extremely low. This is not due to the absence of allegations, but rather to the lack of follow-up on the complaints. Alkarama recommended the Committee to request the Mauritanian authorities to explain the reasons for this absence action on the allegations of torture, in particular those raised by the IRA Mauritanian activists after their arrest last summer.

The other major problem is the violations committed between 1986 and 1991 against black Mauritanian officers accused by the authorities to have staged a coup, a matter which is yet to be investigated in a prompt, impartial and independent manner. In addition to this lack of independent investigation and procedures, that allow to shed light on those violations, is the worrying practice of reprisals against victims, their rights-holders and activists denouncing impunity and requesting investigations and prosecutions against perpetrators.

The lack of independence of the National Human Rights Commission

Alkarama, together with nine other local civil society organisations, submitted to the Subcommittee on Accreditation (SCA) of the Global Alliance of National Human Rights Institutions an evaluation report of the CNDH which highlighted the lack of transparency in its selection process and the lack of independence vis-a-vis the Executive. Subsequently, the SCA decided to postpone the CNDH’s review to its second session of 2017. However, the SCA noted that the appointment and dismissal process was not sufficiently "ample and transparent" and did not allow for a merits selection of its members. The SCA also highlighted the concerns of some Special Procedures and the civil society regarding the lack of independence vis-a-vis the Executive and its position in favor of the death penalty against an activist for ‘apostasy’. Alkarama therefore suggested the experts to ask the Mauritanian authorities whether any measures had been taken to remedy those failures.