Mauritania: An Activist Fighting against Impunity Threatened and Persecuted by the Authorities 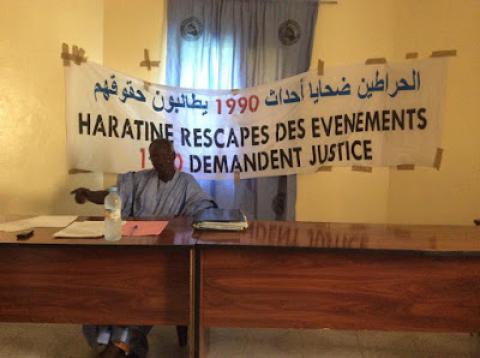 On 23 July 2015, Alkarama submitted a communication to the United Nations Special Rapporteur on the promotion of truth, justice, reparation and guarantees of non-recurrence (SR Truth) concerning the case of Abderrahmane Ould Ahmed, an activist still threatened and persecuted by the Mauritanian authorities for his fight against the impunity of the perpetrators of the Inal massacre of black Mauritanians in the early 1990s.

In 1986, a group of black Mauritanian army officers were accused by the government of plotting a coup. Many of them were arrested, tortured and some even were executed. Meanwhile, the Mauritanian authorities were removing all black Mauritanians who had any position of responsibility. Several hundreds of people were killed in particularly cruel and inhumane conditions, some of them even buried alive, others burned alive or torn between two vehicles.

This crackdown continued for years. Starting in 1990, several thousand soldiers and officers were arbitrarily arrested and tortured under the pretext of a conspiracy that has never shown any evidence. On 28 November 1991, 28 officers and noncommissioned army officers were hanged in Inal, a town situated to the east of Nouadhibou, the economic capital of Mauritania.

The toll of this repression was particularly heavy: between 1986 and 1991, at least 3,000 people were arrested, tortured or killed. Of the 256 interned in the military camp of Inal, only 96 were still alive in 1991, after several months of detention in appalling conditions.

The case of Abderrahmane Ould Ahmed

On 27 October 1990, Abderrahmane, one of the few survivors of this tragedy, was arbitrarily arrested and taken to a military camp, along with other black Mauritanian individuals, where he was held incommunicado for 150 days and tortured daily.

Since his release, he has nevertheless remained a target of harassment, intimidation and violence by the Mauritanian security services, because of his constant calls for the perpetrators of crimes committed against the black Mauritanian minority to be convicted and prosecuted. On several occasions, Abderrahmane has stated that he would not simply claim financial compensation for the victims without requesting an investigation into the killings of Inal and to prosecute those responsible for them.

Abderrahmane has notably been threatened with death by the security services and he reports that his family has also suffered daily harassment. Among others, Abderrahmane was arrested for a second time by the police on 25 June 2015, before being incarcerated for two days at the police station in Nouakchott, the capital city of Mauritania, where he was beaten and humiliated. Less than two weeks later, on 6 July − following a press conference that he had held at the headquarters of the Free Confederation of Mauritanian Workers (CLTM) on 3 July 2015, during which he spoke of the 1990s massacres, naming the perpetrators of these crimes, including Colonel Ould Taya and the current Director General of National Security (DGST), Mohamed Ould Maguett − Abderrahmane received a call from the latter who threatened him with retaliation.

In response, on 8 July at 11am, Abderrahmane organised a sit-in in front of the office of the UN High Commissioner for Human Rights (OHCHR) in Nouakchott, to raise awareness of the fight he leads and renew his claims. Police forces then repressed the peaceful sit-in, dispersing the demonstrators with tear gas.

Then, on 9 August, when he was not far from the gas station of the Ould Khteïra building in the district of Dar Naïm in Nouakchott, a non-registered tinted-window car almost ran him over. Details of the car suggest that it was a deliberate attempt to crush him, especially since the driver did not stop and kept on driving. Despite all this, Abderrahmane means to continue his fight to the end. "I know that my life is in danger," he said, "but I will pass this file to a trusted man, for him to continue the fight even after my disappearance."

Until today, none of the steps taken by Abderrahmane has ever led him closer to his goal, and the open letter he sent to President Mohamed Ould Abdel Aziz – a former Mauritanian General, and President of the Republic since 5 August 2009 – asking him to open an investigation into the Inal massacres and to compensate the victims and their families, has gone unheeded.

On the contrary, those responsible for the serious human rights violations committed between 1989 and 1991 were granted amnesty by Law No. 93-23 of 14 June 1993, a law enacted by the perpetrators, which de facto covers acts of torture, enforced disappearances and extrajudicial executions, granting amnesty to the perpetrators and violating the victims' rights to equality before the law, access to justice, fair and effective remedy and reparation.

Given the constant harassment suffered by Abderrahmane Ould Ahmed, Alkarama has asked the UN Special Rapporteur on the promotion of truth, justice, reparation and guarantees of non-recurrence (SR Truth) to urge the Mauritanian authorities to cease all acts of persecution against Adberrahmane and to put an end to violence against peaceful demonstrations.

Furthermore, Alkarama has stressed the need for the Mauritanian authorities to reconsider the 1993 law, which denies the massacres' victims and their families the right to speak or to access to justice and prevents them from receiving any compensation.