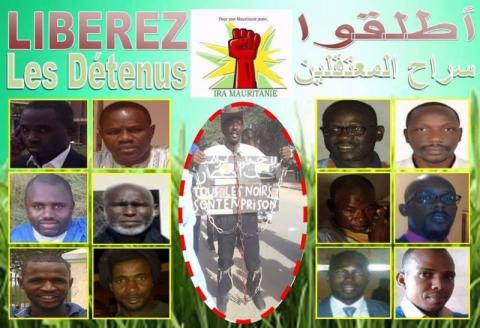 On 19 October 2016, a group of seven United Nations human rights experts* issued a press release to express their "serious concern" about the situation of activists from the Resurgence of the Abolitionist Movement Initiative (IRA Mauritania) "imprisoned for their alleged role in a demonstration against forced evictions in Nouachkott" and "targeted by the government for their anti-slavery advocacy".

Arrested in early July 2016, these human rights defenders had not taken part in the protest during which many people, including policemen, were injured. They were however sentenced, on 18 August 2016, to heavy prison sentences ranging from 3 to 15 years on the basis of confessions extracted under torture and following an unfair trial. The UN experts stressed that the Mauritanian government, known for its hostility to criticism from civil society, was even more hostile towards groups like IRA, "whose members are from the Haratine minority and who work to promote the end of slavery."

The expert group deplored that the most fundamental guarantees had not been respected during the trial, and saw in the activists' recent transfer to the Zouerate prison, about 700km from Nouachkott, "another indication that these prosecutions are politically motivated an designed to stifle groups and individuals who promote human rights and oppose government policies."

The experts also expressed their concern about the deteriorating health of some of them. Thus, they called on the Mauritanian authorities to transfer them back to Nouachkott and reminded them of their obligations to respect their right to health as well as to their right to freedom of opinion and expression.

Alkarama had submitted their case to the Special Procedures in July and October, while calling on the Mauritanian authorities to release them immediately, to drop all charges against them, to cease all acts of persecution against activists calling for the respect of civil and political liberties and to ensure that such violations do not recur.