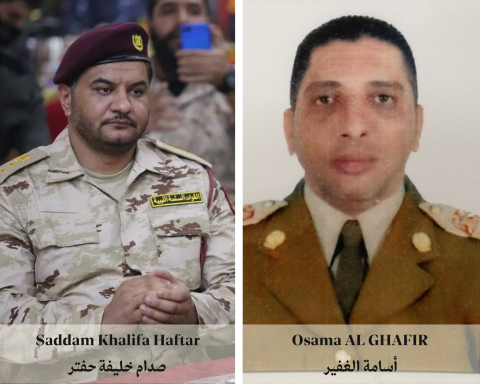 On 23 September 2022, Alkarama addressed the UN Working Group on Arbitrary Detention regarding the situation of Colonel Osama Muhammad Saleh AL GHAFIR AL OBEID who was captured in 2016 by General Khalifa Haftar's militia while securing oil installations in the Sirte region.

Colonel Osama AL OBEID had been tasked by the Tripoli government to ensure the security of oil installations in the Sirte region. He was captured by General Khalifa Haftar's militia in an operation led by militia leader Mahmoud Ahmouda and was then taken to their premises.

On 12 August 2016, the colonel appeared on a television programme broadcasted on Al-Hadath TV controlled by General Khalifa Haftar. He appeared to be speaking under duress and showed signs of extreme fatigue and torture. Since then, his family has had no news of him.

It was only on 15 February 2022 that one of his released co-detainees informed his relatives that he had recently been detained with him in the area of Si Faraj, near Benghazi, in the premises of the "Tariq bin Ziyad Brigade", controlled by the son of General Khalifa Haftar, Saddam Khalifa Haftar.

These premises are headed by Suleiman Al-Saiti, a militia leader close to the Hafter family. The former co-detainee testified that he saw the victim being tortured at length during these interrogations by Suleiman Al-Saiti and by General Khalifa Haftar himself. He also reported that the victim was electrocuted and burned.

A few months after his capture, his family tried to contact the Benghazi Prosecutor General who informed them that the colonel had never been brought before him and that he was not in an official prison.

On 21 March 2022, Alkarama submitted his case to the UN Working Group on Enforced Disappearances. However, in August 2022, the victim's brother was again informed by another recently released prisoner that Mr Osama AL GHAFIR AL OBEID was being held in solitary confinement in Guernada prison.

Colonel Osama Muhammad Saleh AL GHAFIR AL OBEID was abused by Khalifa Haftar's militias in 2016. Since then, he has been detained without being tried or even charged. Exhausted, the colonel has languished arbitrarily in detention without any court decision for more than 6 years.

Khalifa Haftar's militias are beyond the control of any judicial authority. They arbitrarily detain hundreds of people in secret.

The UN has already addressed the extent of arbitrary detention in Libya, while various human rights organisations have reported disturbing violations committed with impunity by Khalifa Haftar's militias.

Alkarama has also received numerous testimonies of arbitrary arrests and abductions of individuals by these militias, some of whom remain in a situation of enforced disappearance to this day. The released victims testified to the systematic use of torture and other ill-treatment in places of detention. They reported being victims of beatings, electric shocks, mock executions, flogging and mock drowning.

Concerned by this recurring situation in the country, Alkarama again called on the UN Working Group on Arbitrary Detention to intervene, this time on behalf of Colonel Osama Al Obeid to call for his release. At the same time, Alkarama stressed the importance of placing all of these militias, without exception, under the effective control of the legal government and judicial authority.