Guantanamo. Twenty years of disregard for law and human conscience 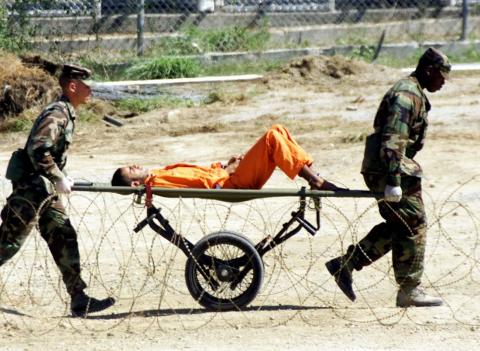 Twenty years after the arrival of the first detainees in Guantanamo Bay, Cuba, this prison has remained a symbol of the unjust US policy in its "war against terror", which was conducted outside the frameworks of international humanitarian and human rights law.

UN human rights experts condemned the detention centre as a “site of unparalleled notoriety” and called on the US government to close it and return its detainees to their homes or to safe third countries.

In a statement marking the 20th anniversary of the opening of Guantanamo, the UN experts declared that two decades of “practising arbitrary detention without trial accompanied by torture or ill treatment is simply unacceptable for any government”.

According to UN experts, Guantanamo is a detention centre known for its systematic use of torture and other cruel, inhuman or degrading treatment against hundreds of men who have been brought to the site and deprived of their most basic rights.

Experts also declared that the site was a “symbol of a systematic lack of accountability for state-sponsored torture, ill treatment, and impunity granted to those responsible”.

The experts called on the US government to close the site, return the detainees to their homes or to safe third countries, while respecting the principle of non-refoulement, provide remedies and compensation for those who have been subjected to torture and arbitrary detention by its agents, and hold accountable those who have allowed and participated in the torture, as required by international law.

The experts condemned the lack of adequate medical assistance and rehabilitation for torture victims at Guantanamo even after their transfer, stressing that the suffering of these individuals and their families continues unabated. They highlighted that the continuation of unfair proceedings, lack of transparency and equal defence for the accused was a disgrace to the United States' stated commitment to the rule of law.

In particular, the experts highlighted the failures of the US judicial system to play a constructive role in protecting people, maintaining the rule of law and allowing the legal black hole at Guantanamo to flourish with their consent and proven support.

Finally, the experts praised the "tireless and courageous work" of the defence lawyers who fought to protect the rule of law and identified persistent human rights abuses in the daily work of the commissions.

The experts stated that the military commissions established by the US continue to violate the requirements of impartiality, independence and non-discrimination against detainees at Guantanamo, and should never be used in the manner in which they are deployed there. Military commissions are special bodies affiliated with the US Department of Defense that have been set up to prosecute detainees on the grounds that the military base is located outside the United States.

The UN experts' statement on Guantanamo concurs with the positions and statements that Alkarama has adopted over the past years in this regard. The issue of the detainees at "Guantanamo Bay" has remained at the top of Alkarama's list of concerns, through various support and advocacy mechanisms. It has also organised or participated in numerous conferences, events, field activities and sit-ins by families of the detainees and non-governmental organisations to highlight the suffering of the victims of this detention and their families. Alkarama has also launched advocacy campaigns to defend these forgotten detainees, who have been subjected to violations and deprived of their rights, guaranteed by international humanitarian law.

Alkarama has submitted dozens of complaints to the UN Special Procedures against the United States regarding detainees at Guantanamo, for example, on 6 June 2013, Alkarama filed a complaint with the UN Working Group on Arbitrary Detention regarding former Saudi detainee at Guantanamo, Abd al-Rahman Shalabi Issa Oweida.

On 29 October 2008, Alkarama filed a complaint with the Working Group on Arbitrary Detention informing it of the arbitrary detention of three Sudanese nationals at the US military base at Guantanamo Bay. The three men were working in relief and humanitarian work in Afghanistan.

Following the 11 September 2001 attacks in the United States, many Islamic charity workers were suspected of engaging in 'terrorist' activities, some of whom had been in Afghanistan for many years, leading to their arrest by elements of the Pakistani military and subsequent transfer to the US military at Guantanamo Bay.

Al-Jazeera's image reporter, Sami Al-Hajj, is one of the cases Alkarama has worked on. She wrote to the Working Group on Arbitrary Detention and the Special Rapporteur on Torture on 29 November 2007, asking them to intervene.

Continued suffering of prisoners after their return

Even after the return of many Guantanamo detainees to their home countries or to other countries, they continued to suffer persecution and the confiscation of their rights. Alkarama has followed with concern the conditions of many Guantanamo returnees who face extremely precarious humanitarian conditions. This is the case of the 18 Yemeni detainees transferred to the United Arab Emirates, which did not respect its commitments towards them. They were then released in two waves, the first in July and the second in October 2021.

Alkarama has maintained contact with many families of Guantanamo detainees, even after their return, as they are often subjected to re-arrest and ill-treatment by the authorities in their country, instead of rehabilitation and reparation.

For example, in the case of Algerian national Mr Abdelaziz Naji, despite his refusal to be handed over to the Algerian authorities, where he feared persecution and ill-treatment, the United States finally handed him over to the authorities in his country on 19 July 2010. Upon arrival at Algiers airport, he was abducted by agents of the Directorate of Intelligence and Security (DRS), who took him to an incommunicado detention centre.

Abdelaziz Naji, one of the few former Guantanamo detainees to have been tried and sentenced to prison terms in his home country. Before him, there was the case of Abdallah Hajji, a Tunisian citizen released in June 2007 by the US authorities, freed after five years of detention in the US camp at Guantanamo Bay. Although no charges were brought against him, a Tunisian court sentenced him in 2007 to eight years in prison. He was released in January 2011 after the fall of President Ben Ali's regime.

In Yemen, the political security services in the governorate of Al-Mahra (south-east Yemen) arbitrarily detained Mr Karama Khamis Saeed Khamisan incommunicado for five months immediately after his return from Guantanamo without being brought before a judge. He was released on 16 August 2009.

Alkarama also worked on the case of Yemeni citizen Amin Muhammad Al-Bakri, during his detention and until his release and return to Yemen in August 2014. Alkarama submitted two complaints to the UN Working Group on Arbitrary Detention, on 5 July 2006 and 7 February 2007. As a result, the Working Group issued Resolution No. 11/2007 on 11 March 2007, ruling that his detention was arbitrary.

Amongst Alkarama's main positions, its questioning of the American allegations concerning the suicide of certain detainees at Guantanamo. Alkarama learned of the death of three detainees, one of Yemeni origin and the other two being Saudis, Mr Mana' Al-Otaibi and Mr Yasser Al-Zahrani. According to news agencies, the three detainees committed suicide in their cells on the morning of Saturday 10 June 2006 using pieces of cloth in their possession.

Later, on 11 September 2012, US military authorities announced the death of Yemeni detainee Adnan Farhan Abdul Latif Al-Sharabi, noting that a military medical team had performed an autopsy on the body and that the results of the autopsy would take some time to be announced. For their part, the victim's family and Alkarama have demanded an international investigation and an autopsy conducted by neutral parties so that the military authorities do not falsify evidence to erase the effects of a possible involvement in an "extrajudicial execution", noting that Mr Adnan is the third Yemeni to die in this terrible prison, condemning both the secret and mysterious deaths of prisoners at the US detention camp at Guantanamo Bay in Cuba.