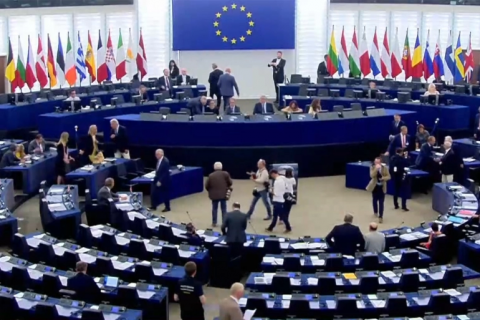 The European Parliament has issued a resolution on human rights in Egypt, which is considered as a first step towards upholding the international community's responsibility for international human rights law and combating policies of impunity for violations. Alkarama urges the various international bodies to assume their responsibilities in the face of the worsening reality of human rights in the Arab region in general, and to take tough measures against senior officials involved in crimes of torture, arbitrary detention, repression and any form of reprisals against human rights defenders.
In this context, Alkarama's Legal Director, Mr. Rachid Mesli, states: "We are following with great concern a frightening deterioration of freedoms and human rights in the Arab Republic of Egypt since the coming to power of Egyptian President, Marshal Abdel Fattah Al-Sissi, where the country's policy is characterized by a military approach to the regime in a context of a state of emergency and repression. He silenced political opposition and human rights activities, which led Alkarama, in the context of his concerns, to intervene in dozens of cases on behalf of the victims and submit complaints about them to UN special procedures".

The European Parliament's decision includes 19 points, the most important of which is the call for a thorough and comprehensive review of the EU's relations with Egypt, as "the human rights situation (in that country) requires serious consideration", according to the text published in the decision. The resolution also called on EU countries to consider taking restrictive measures against senior Egyptian officials involved in serious violations, in accordance with the Magnitsky Law. It affirmed its support for the family of Italian graduate student Giulio Regeni, who was killed in Egypt in 2016.
In the text of its decision, the European Parliament condemned the continued and intensified repression against human rights and women's rights defenders, dissidents, and civil society leaders, calling for an independent and transparent investigation, calling for the "immediate and unconditional release of those arbitrarily detained and sentenced for carrying out their legitimate and peaceful work in the field of human rights.
The Parliament expressed its concern about the fate of prisoners detained "in overcrowded places in squalid conditions during the outbreak of the Covid-19 pandemic", calling on the authorities to urgently reduce the overcrowding in places of detention.
The resolution also condemned the "non-compliance" by European Union member states with the call to "stop all exports of arms, surveillance technology and other security equipment to Egypt that could facilitate attacks against human rights defenders and civil society activists, including on social networks.

The Egyptian authorities have consistently ignored warnings by independent UN human rights experts about the "serious and unnecessary" risks faced by human rights defenders arrested in the country due to prolonged pre-trial detention.
The experts had stated, in a statement issued in August 2020, that the risks are greater during the Covid-19 pandemic, and called on the authorities to facilitate the release of chronically ill detainees or those detained without a proper legal basis.

Alkarama shares the experts' concern in this regard, and has closely followed the cases of many political prisoners in the Egyptian regime's prisons, including the case of the late President-elect Mohamed Morsi, whose death was announced on 18 June 2019, as confirmed by UN experts at the time, his death was directly related to the conditions he had been held in Egyptian prisons, warning at the same time that other prisoners would suffer the same fate if Egypt did not address deteriorating prison conditions. But the Egyptian government ignored these warnings, and the result was the deaths of other prisoners, the last of whom was the leader of the Muslim Brotherhood, Essam El-Erian.

At the heart of Alkarama's concerns

In the context of its concerns, on 28 March 2019, Alkarama submitted its shadow report on human rights in Egypt to the UN Human Rights Council in preparation for the Universal Periodic Review in November 2019, focusing on the systematic practice of arbitrary detention and torture. It also highlights the endemic crime of enforced disappearance. The 2015 anti-terrorism law that legalized the systematic repression of human rights activists, journalists, and peaceful dissidents is a vague and incomplete law. Alkarama has also expressed concern about the use of the death penalty as a means of repressing dissident voices and those exercising their fundamental right to freedom of expression.
Alkarama made 24 recommendations in its report, including calling for the ratification of the International Convention for the Protection of All Persons from Enforced Disappearance, the Optional Protocol to the Convention against Torture and Other Cruel, Inhuman or Degrading Treatment or Punishment, the First Optional Protocol, the Second Optional Protocol to the International Covenant on Civil and Political Rights, aiming at the abolition of the death penalty, the Rome Statute, and also calling for the facilitation of the work of UN Special Procedures and the submission of overdue reports to treaty bodies.

In addition, Alkarama recommended the abolition of the death penalty and the absolute prohibition of torture, enforced disappearances, and arbitrary detention, as well as the opening of investigations into all reported cases. Alkarama called on the Egyptian government to amend its anti-terrorism legislation and its policy in dealing with demonstrations and non-governmental organizations, which gravely violates Egyptian citizens' rights to freedom of expression, peaceful assembly, and association.

Earlier on September 20, 2017, the UN Under-Secretary-General for Human Rights, Andrew Gilmour, presented the UN Secretary-General's annual report to the Human Rights Council on reprisals against persons cooperating with the United Nations.
The report (A/HRC/36/31) included a number of cases Alkarama is working on, including the case of Ahmed Amasha, who was abducted and held incommunicado for 20 days during which he was subjected to electric shocks and rape by state security agents to force him to confess to belonging to a banned group. He was charged under the anti-terrorism law for submitting cases of arbitrary detention and enforced disappearance to the United Nations.
Andrew Gilmour also cited the case of Ibrahim Metwally, who was arrested at Cairo International Airport on September 10, 2017. He was on his way to Geneva to meet with the UN Working Group on Enforced Disappearances. Ibrahim Metwally was accused of "spreading lies" and "conspiracy with foreign entities, including the Working Group on Enforced or Involuntary Disappearances".

Meanwhile, the Committee Against Torture concluded after four years of investigation, based on reports it obtained from Alkarama between 2012 and 2016, that the practice of torture is "common, widespread and intentional in a large part of Egypt".
According to its rules, the Committee against Torture keeps the information and reports it receives confidential throughout the period of investigation. However, after the committee published its findings, Alkarama published its initial report along with the eight follow-up reports it submitted to the UN committee under Article 20 of the Convention Against Torture in order to highlight in detail the violations it documented in Egypt.

Under Article 20, Alkarama has submitted complaints to the Committee against Torture regarding individual and collective cases of torture, which it has itself and other NGOs documented. Since its creation in 2004, Alkarama has documented thousands of cases of torture in Egypt, and has also called on the United Nations to conduct an investigation, having submitted more than 150 cases to the UN Special Procedures in its initial report.
At its forty-ninth session in November 2012, the Committee against Torture considered that the information contained in Alkarama's report was reliable and that "torture is systematically practiced on Egyptian territory" and called on the government to respond to Alkarama's reports. In November 2013, a request for a visit by its competent rapporteurs was made, but the Egyptian authorities did not respond to the request for cooperation with the UN committee.
In addition, the Egyptian authorities did not respond to the Committee against Torture between 2013 and 2014, and attempted to shed light on its "constitutional and legislative guarantees" against the practice of torture and attempted to question the reliability of the information provided by Alkarama.
However, the UN Committee warned of the large number of cases presented by Alkarama to the Committee against Torture that there is "a dangerous conflict between law and practice" regarding torture in Egypt.
Between 2012 and 2016, Alkarama continued to document more cases and submitted eight follow-up reports to the relevant committee to inform it of developments and other cases of torture, in addition to Egypt's non-compliance with its obligations under the convention and the continued practice of systematic torture during this period.
AlKarama's reports cover the post-Mubarak era during which the Supreme Council of the Armed Forces, then President Morsi, and finally Marshal Abdel Fattah al-Sissi took power in Egypt. The data indicates that the human rights situation since al-Sissi's seizure of power is the worst period Egypt has ever experienced.
The Committee Against Torture, based on reports provided to it by Alkarama, UN officials, UN agencies, and other non-governmental organizations, concluded that torture remains systematic in Egypt despite the succession of governments. Information obtained by the commission from the above sources indicates that torture is used to extract confessions from detainees who are often arrested because of their political affiliations or participation in demonstrations, while those involved in these acts remain far from being held accountable and commit gross human rights violations with impunity.
The Committee against Torture concluded, in light of information obtained from Alkarama and other sources, to "an inescapable conclusion that torture is a systematic practice in Egypt". The Committee against Torture addressed several urgent recommendations to the State party, including the cessation of the practice of torture in detention centers, zero tolerance for those involved in order to end impunity and allow public condemnation of torture and ill-treatment by officials.