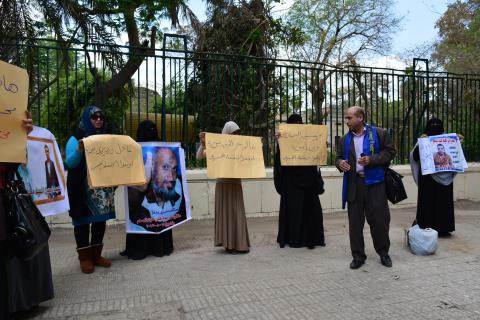 On September 10, 2017, Ebrahim Metwally was abducted at Cairo International Airport as he was about to board a flight to Geneva to attend a meeting with the UN Working Group on Enforced or Involuntary Disappearances (WGEID). He was subsequently held incommunicado for two days.

Metwally is a 54-year-old lawyer and coordinator of the Association of the families of the Disappeared, an NGO he founded after his son, Amr Ebrahim Abdelmonem, disappeared in July 2013 and has remained missing since.

In the morning of September 10, Metwally was dropped off at the airport by his son, Ahmad, and as they agreed, Ahmad waited for a call from his father to confirm he had passed the police check. Forty minutes later, Ahmad became worried and tried to call his father to check on him. After a few attempts, the phone was suddenly switched off and Ahmad knew immediately that something had happened to his father.

Two hours later, Metwally's phone was switched back on for a few minutes, and his son sent him a text message on WhatsApp. He responded by saying he was on the plane and asking him not to worry, yet still he did not return his son’s calls. The family believes these texts were being sent by the State Security officers holding him at the time.

At around 1 p.m., the phone was switched on again, and an unknown voice answered the family's call before immediately turning the phone off again. The family did not hear from Metwally for two days until he reappeared at the State Security Court on September 12.

Metwally was charged with “founding and leading an illegal organisation named Association of the families of the disappeared,” “spreading lies” and “conspiracy with foreign entities, including the Working Group on Enforced or Involuntary Disappearances.”

The judge ordered his detention for 15 days pending the investigation, and Metwally is now being held at Tora high security prison (also known as Al Aqrab 2). Ebrahim Metwally’s family believes he was targeted as reprisals for both his activities as a peaceful human rights defender, and for his cooperation with the WGEID. This is further confirmed by the fact that the WGEID invitation letter was added as a piece of evidence in Mr Metwally’s criminal file.

On September 11, Alkarama sent an urgent appeal to the WGEID and to the Special Rapporteur on the situation of human rights defenders (SR HRD) regarding Ebrahim Metwally’s disappearance, requesting their immediate intervention with the Egyptian authorities.

On September 13, Alkarama sent an update to inform the special procedures of the reappearance of the victim and to reiterate its request to these UN bodies to call for Metwally’s immediate release, and to urge the Egyptian authorities to allow him to move freely within the country and to travel abroad without being troubled in any way.