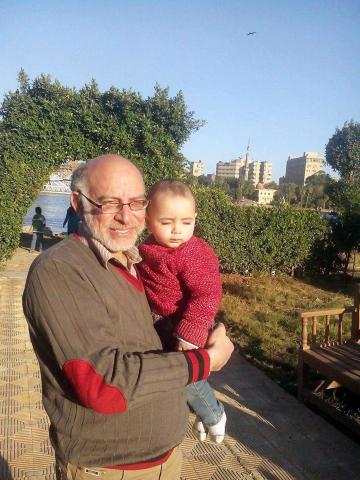 On 21 April 2017, Alkarama sent an urgent appeal to the Special Rapporteur on human rights defenders (SRHRD) and the Special Rapporteur on torture (SRT) requesting them to act urgently concerning the case of 56-year-old human rights activist Dr Ahmed Shawky Abdelsattar Mohamed Amasha, who was abducted on 10 March 2017 at a police checkpoint in Cairo and who remained disappeared for 21 days, during which he was severely tortured. He reappeared on 1 April 2017 and was charged with “belonging to a banned group” under the Anti-Terrorism Law. He is currently held in inhuman conditions in the Tora Prison of Cairo and his family fears that he might still be at risk of further torture and ill-treatment.

On 10 March 2017 at 5 pm, Amasha, an activist advocating for the rights of families of victims of enforced disappearance, member of the “Kefaya” opposition movement and trade unionist, was crossing the Nasr City checkpoint when he was arrested by policemen, some wearing uniforms while others were in civilian clothes. Following his arrest, his family went to inquire about his fate and whereabouts in different police stations but was denied any information, and the State agents kept on denying his arrest and detention. On 13 March 2017, Alkarama sent an urgent appeal to the Working Group on Enforced Disappearances (WGEID) about his case, which intervened with the Egyptian authorities.

On 1 April 2017, Amasha reappeared before the Public Prosecutor of Tagamo’ El Khames (district 5) in Cairo, where he was interrogated without the assistance of a lawyer and was charged with “belonging to a banned group” under the Anti-Terrorism Law; peaceful activism being considered by the Egyptian authorities as a crime of terrorism. He was then transferred to the Tora Prison of Cairo, a facility infamous for subjecting human rights defenders and political opponents to physical and psychological torture and other ill-treatments while detaining them in inhuman conditions.

Amasha affirmed that following his abduction on 10 March 2017, he was secretly detained at the central police station of Abbasiya in the Cairo Governorate, the newly established headquarters of Homeland Security services, where he was subjected to particularly heinous acts of torture and ill-treatment. He notably reported that he was blindfolded and handcuffed in the back, electrocuted on different parts of his body and threatened of rape if he did not confess to “belonging to a banned group”. After a few days, and as Amasha refused to confess, State security officers raped him using a stick and threatened to rape his wife and daughters as well.

“We believe that Dr Amasha was arrested, tortured, raped and prosecuted in retaliation for his activities as a peaceful human rights defender,” said Radidja Nemar, Alkarama's Regional Legal Officer for North Africa. “The severe violations to which Dr Amasha is subjected also illustrate the ruthless repression of human rights defenders since the July 2013 military takeover and the use of the 2015 Anti-Terrorism Law to prosecute them,” she added.