Egypt: Arbitrary Detention of a Human Rights Defender in Retaliation for Her Peaceful Activism 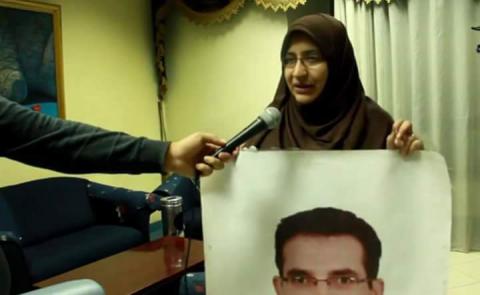 Dr Hanane Baderraddine Abdalhafez Othman, a doctor in biology and human rights defender, was arrested on 6 May 2017 by members of the National Security Services at the Al Qanater Al Khayriyah Prison, where she went to inquire about the fate and whereabouts of her disappeared husband. This women, who is also very active in providing assistance and support to other women whose relatives were victims of enforced disappearance, was charged with “belonging to a banned group” and “forming a women’s organisation”. She is currently held at the Al Qanater Al Khayriyah Prison for women in inhuman conditions. Her family is worried that she might be at risk of ill-treatment or even torture.

On 6 May 2017, Dr Othman went to the Al Qanater Al Khayriyah Prison in the Governorate of Qalyubiya about 30 km north of Cairo, to inquire about the fate and whereabouts of her husband, Khaled Mohamed Hafez Mohamed Azzedine, who has been disappeared for four years following his arrest by State security agents. Upon arrival, Dr Othman started asking the guards and security agents about her husband, asking if he was or had been detained there.  However, the authorities responded by sending a group of National Security forces, some wearing uniforms and others civilian clothes, who proceeded to arrest her without any warrant and without officially informing her of the reasons for her arrest. She was taken to an unknown police station close by the Al Qanater prison, where she was subjected to severe psychological pressure while interrogated for long hours. Despite her requests, she was not allowed to inform her family of her whereabouts.

The next day, Dr Othman was brought before the Public Prosecutor of Shubra El Kheima of the Qalyubiya Governorate and was officially charged with “joining a banned group” and “forming a women’s organisation”. Since her arrest, her detention has been continuously extended in spite of her lawyer’s requests to release her in the absence of evidence or any reason justifying her detention. She is currently detained in inhuman conditions at the Al Qanater Al Khayriyah Prison for women where she is denied the right to receive family visits and remains subjected to constant and severe psychological pressure.

Dr Othman is human rights defender documenting cases of enforced disappearances in Egypt for submission to the UN Working Group on Enforced and Involuntary Disappearances (WGEID). The past four years, she has been inquiring about her husband’s fate and whereabouts and assisting other women to inquire about their own disappeared relatives, within an association of families of victims. Dr Othman was working closely with Dr Ahmed Shawky Abdelsattar Amasha, which case was submitted by Alkarama to the Special Rapporteur on the situation of human rights defenders (SR HRD) on 21 April 2017.

“It is obvious that Dr Othman was arrested and prosecuted in retaliation for peacefully claiming her right to truth about the fate and whereabouts of her husband and assisting other women in claiming their rights,” said Radidja Nemar, Alkarama's Regional Legal Officer for North Africa. “The way she has been treated and the nature of the charges brought against her speak volumes about the gravity of the situation in Egypt and the risks that human rights defenders face on a daily basis” she added.

A complaint was submitted on behalf of Dr Othman to the SR HRD on 9 June 2017, requesting the UN expert to urgently intervene and calling on Egyptian authorities to immediately release her, to put an end to the prosecution and drop all charges brought against her, as it manifestly criminalises her peaceful and legitimate activism.