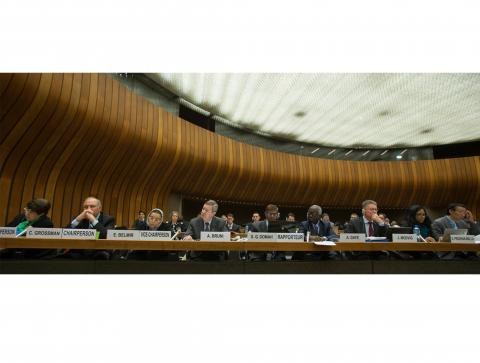 On March 26, 2018, Alkarama submitted its shadow report ahead of Qatar’s upcoming review by the United Nations Committee against Torture (CAT) during its 63rd Session in May 2018.

The report, which is based on Alkarama’s documentation of human rights violations – including individual cases – in Qatar since its last review in 2013, highlights serious deficiencies in the country’s existing legislation governing torture, ill-treatment and other forms of degrading and inhuman treatment.

Criminalisation of torture and prosecution of perpetrators

Qatar has incorporated the definition of torture, as set out in article 1 of the Convention against Torture (UNCAT), into its Penal Code. Despite this, it has not included any provisions to ensure that no exceptional circumstances whatsoever may be invoked as justification for torture or ill-treatment.

Alkarama’s report highlights that while Qatar has strengthened punishments for perpetrators of torture, the law does not outline a minimum penalty, thus failing to take into account the gravity of the offence.

Violations to the principle of non-refoulement

In its report, Alkarama expressed concern over the lack of legal provisions – in compliance with article 3 UNCAT – expressly prohibiting the expulsion, return or extradition of a person to another state where there are substantial grounds for believing that they would be subjected to torture.

Furthermore, Qatar is party to several bilateral and regional agreements that enable the extradition of wanted individuals to states where they are likely to be tortured. For instance, article 16 of the Gulf Cooperation Council (GCC) Security Convention of 2012 stipulates that State Parties are obliged to extradite individuals within their territory who have been accused or convicted by another member state.  This renders residents vulnerable to refoulement for a range of unspecified crimes.

For instance, Alkarama has documented the case of the prominent human rights defender and co-founder of the Union for Human Rights Mohammad Al Otaibi, who was arrested at Doha Airport while on his way to seek political asylum in Norway, and extradited to Saudi Arabia on May 24, 2017. On January 25, 2018, Al Otaibi was sentenced to 14 years in prison on charges related to his peaceful political activism, including “dividing national unity”, “abusing the kingdom via Twitter” and “calling to change the basic system of governance”.

The abovementioned case demonstrates a clear breach of Qatar’s obligations under article 3 of the UNCAT. Given the systematic use of torture in Saudi Arabia, there was a substantial risk that Al Otaibi would be subjected to such treatment if extradited.

Alkarama’s report also examines Qatar’s counter-terrorism legislation, which includes the 2002 Law on the Protection of Society and the 2004 Law on Combating Terrorism. These laws allow for derogation from legal safeguards enshrined in the Code of Criminal Procedure. In particular, they allow excessive periods of pre-trial detention of up to one year for a number of vaguely defined crimes including, “breaching the public order […] harming establishments” and crimes related to “decency or public morals”.

In practice, these laws have resulted in several cases of violations of due process rights. For instance, Alkarama documented the case of Mohammad Meshab, who was arrested on December 17, 2015 without a warrant. He was subjected to ill-treatment and detained in prolonged solitary confinement until August 2016. After more than two years, the court has still not pronounced a final ruling and he remains in detention in Doha.

In its report, Alkarama highlighted the lack of independence of the Qatari judiciary. This is evidenced by the fact that all judges are appointed by the emir, therefore undermining their independence and impartiality.

In addition, the report points out that the tenure of judges without Qatari nationality is not guaranteed in the same way as that of national judges. Indeed, they are often recruited on temporary contracts, which have to be renewed annually. As a consequence, they are vulnerable to pressure from all sides, including the public prosecution, lawyers and the executive.

In its report, Alkarama recommended, among other things, that Qatar incorporate a provision into its legislation stating that no exceptional circumstances whatsoever may be invoked as a justification of torture; incorporate the principle of non-refoulement as prescribed in article 3 of the UNCAT into national legislation; ensure that the legal safeguards provided in the Code of Criminal Procedure apply equally to terrorist suspects; and ensure the tenure of foreign judges in order to secure their independence.