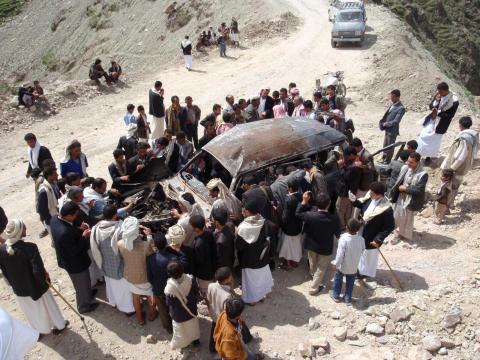 Since Donald Trump took office in 2017, at least 86 civilians, including women and children, have been killed in Yemen in attacks, most of which were drone strikes, by the United States of America, some with the participation of the United Arab Emirates, according to the Washington Post.
Alkarama had prepared over the years a series of investigation reports based on field investigations into US drone attacks in Yemen, and had filed complaints with UN special procedures on behalf of the families of the victims, but the organization was subject to a number of reprisals for its activities in this context.
The Washington Post, citing a recent Airwars study, stated that the United States of America had conducted at least 190 armed actions in Yemen since President Donald Trump took office, most of them air strikes, and that these attacks, which included a small number of ground operations, resulted in dozens of deaths and injuries, but the U.S. military has only acknowledged as many as 12 potential civilian deaths during these operations.
The analysis conducted by the British organization Airwars provides new insights into the largely secret war in Yemen, which Alkarama attributes to the attempt to evade criminal and moral responsibility for the civilian victims of these attacks.

"US attacks in Yemen in the context of the war on terror have always involved a violation of international humanitarian and human rights law," said Alkarama's Legal Director, Rachid Mesli, adding that "as a result of the numerous bloody attacks in Yemen, the US administration was quick to announce a major military victory by eliminating armed elements that pose a threat to US national security and US interests, but it later turns out that the victims or most of them were civilians, which means the absence of the principles of proportionality, distinction and military necessity, imposed in principle by international humanitarian law, which embarrassed US officials in the face of public opinion and demands from human rights groups about their willingness to investigate these attacks and provide reparations to the victims and/or their families. "
Similarly, Airwars accused the U.S. Central Command (Centcom), which oversees military operations in the Middle East, of not having "properly identified, investigated and acknowledged the allegations of civilian harm resulting from its actions in Yemen, which is in clear contradiction to current Pentagon policies, and calls for this to be addressed urgently," and similarly urged "U.S. military authorities to investigate allegations of non-combatant deaths and to disclose more information about their actions against armed militants in Yemen.
Airwars reported that most of the armed operations that took place in Yemen during Trump's presidency took place in 2017, noting that the first was an ill-timed raid that took place a few days after Trump's inauguration, and the operation in which elite U.S. and Emirati forces participated resulted in the death of a U.S. Navy soldier and a number of civilian casualties, the only raid during the Trump administration in which the U.S. government acknowledged the possibility of civilian casualties.

It also stated that the military did not set up a team to investigate civilian casualties as it did in Iraq and Syria. The operation, which involved tens of thousands of air strikes, included regular reports on these strikes and measures to increase transparency regarding civilian casualties and "unintentional" deaths.

According to the Central Command, the last U.S. military operation in Yemen took place in June 2019. But Airwars said it appeared that fewer strikes had been conducted by the CIA since then, or that they were the result of covert military activity.

On 3 February 2017, Alkarama informed Ms. Agnès Callamard, the Special Rapporteur on extrajudicial, summary or arbitrary executions of the case of the death of 15 children and women during a military operation led by US and Emirati forces on 29 January 2017 in the governorate of Al-Bayda, Yemen. Alkarama called on Ms. Callamard to publicly condemn the attack, which clearly violates international humanitarian law and international human rights law, and calls on the governments of the United States and the United Arab Emirates to end indiscriminate attacks against civilians in Yemen.
Returning to the details of the bloody attack, in the early morning hours of January 29, 2017, U.S. and Emirati special forces helicopters landed in the mountainous region of Yakla in Al-Bayda governorate, which has been the target of U.S. operations in recent months. According to U.S. sources, the aim of the operation was to collect as much information about Al Qaeda as possible in order to prevent future terrorist acts.
At 2 o'clock in the morning, the commandos infiltrated, heading towards the houses of Sheikh Abdul Raouf al-Dhahab and Sheikh Saif Nams Al Jufi. The attack was revealed, so that US forces began a violent exchange of fire and then received air support from the warship USS McCain, located in the Gulf of Aden, targeting the houses of Sheikh Abdul Raouf Al-Dahab and Sheikh Saif Nams Al Jufi.
Local sources indicate that two fighter planes emerged from the mountainside, followed by four drones and four helicopters, and fired 16 rounds that resulted in the demolition of four houses. Casualties in the attack amounted to approximately 30 people, including a U.S. officer, in addition to at least six women and nine children, including Nuran Al-Awlaqi, the daughter of Yemeni American Anwar Al-Awlaqi, who was killed in a U.S. drone strike in 2011, following suspicions of his association with al-Qaida.
Alkarama expresses, once again, its deep concern at the extreme seriousness of military operations in the context of the "fight against terrorism", during which American and Emirati forces have targeted homes despite their knowledge of the presence of individuals other than "fighters". These forces had to cancel these operations to avoid any loss of civilian life, especially children and women. As a result, these operations did not respect the fundamental principles of international humanitarian law, which stipulates a clear distinction between civilian and military objectives, as well as the principle of precaution and proportionality in military operations.