Yemen: A UN report confirms the involvement ofall parties to the conflict, including Saudi Arabia and the UAE, in serious human rights violations 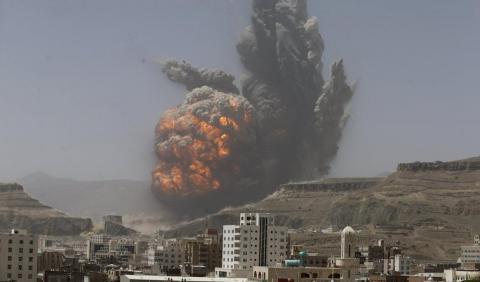 The UN Panel of Eminent International Experts on Yemen said that there is reasonable evidence that Saudi Arabia, the UAE, the Houthis, the Yemeni government and the Southern Transitional Council have committed war crimes and other violations in Yemen.

In its third report, entitled: «Yemen ... A Pandemic of Impunity in the Land of Torture», the Group of Experts  added that  112000 people were killed in the Yemen war, including 12000 civilians.
Alkarama continues to document numerous cases of gross violations in Yemen, committed by the various parties to the conflict, and submit complaints about them to the United Nations special procedures, Alkarama further informs  the media about violations so that  the perpetrators of the violations are held accountable.
According to the UN experts, the human rights violations that have been verified include summary executions, enforced disappearances, arbitrary detention, gender-based violence, including sexual violence, torture and other forms of cruel, inhuman or degrading treatment, as well as the recruitment and use of children in hostilities, the denial of the right to a fair trial and the violations of fundamental freedoms and economic, social and cultural rights.
The Group of Experts concluded that some of the coalition airstrikes appeared to have been carried out without due regard for the principles of distinction, proportionality and precaution to protect civilians and civilian infrastructure. It also concluded that indiscriminate attacks were carried out by the coalition and the Houthis, and caused damage to civilians and their properties.
The Panel rexalled that disproportionate and indiscriminate attacks constitute war crimes under customary international law. The team of experts also investigated the effects of landmines unlawfully planted by the Houthis.
Moreover, the Group of Experts concluded that the parties are responsible for other violations of international humanitarian law, in particular the killing of civilians, torture, cruel or inhuman treatment, rape and other forms of sexual violence, outrages upon personal dignity, denial of a fair trial, and the recruitment of children under the age of 15 or, using them to participate actively in hostilities, which may amount to war crimes.
The head of the team, Kamel Al-Jendoubi, said that Yemen is still a tormented land, and its people are destroyed in ways that shock the conscience of humanity, holding the international community responsible for ensuring that impunity is not carried granted to those responsible for the violations.
The expert group urged the UN Security Council to refer the situation in Yemen to the International Criminal Court, noting that all parties to the conflict are responsible for grave violations, including crimes of depriving the right to life, arbitrary detention, sexual violence and torture.
In the same context, the report of the Group of Experts said that it found evidence confirming the Houthi’s involvement in the recruitment of more than thirty girls as spies, paramedics, guards and members, in a force known as Zainabiyat.
The report pointed out that a generation of Yemeni children has been exposed to immeasurable harm, through recruitment, abuse, and deprivation of education.
It confirmed the documentation of 259 cases of children who were recruited and used in hostilities by several parties, from July 2019 to June 2020.
The experts call on the international community to send a clear message that the perpetrators of the most serious violations will be held accountable. The Security Council should fully integrate aspects related to human rights in Yemen into its agenda. It should also refer the situation in Yemen to the International Criminal Court, and expand the list of people covered by its sanctions.