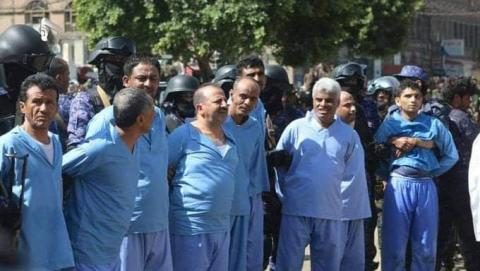 The Office of the United Nations High Commissioner for Human Rights (OHCHR) has expressed serious concern about the situation in Yemen, where all parties to the conflict continue to violate human rights and international humanitarian law in defiance of the fundamental principles of the rule of law.
Alkarama shares OHCHR's concern in this regard and is working to continue to file complaints with the UN Special Procedures on behalf of the victims. Alkarama also works with local and regional organisations to support victims and make their voices heard around the world.
The spokesperson for the Office of the High Commissioner for Human Rights, Marta Hurtado, stated that civilians across Yemen are paying a heavy price as armed groups control and exercise power in total disregard of human rights and international humanitarian law.
Marta Hurtado gave an example of this on 18 September, when the Houthis, also known as "Ansar Allah", publicly executed nine men, including one who was a minor at the time of his arrest. Three years ago, the nine men were accused of involvement in the assassination of the head of the Supreme Political Council of the de facto authorities in Sana'a, Saleh Al-Samad, who was killed in an air strike.
The defendants were sentenced to death in a sham judicial process that violated their constitutional rights and failed to meet fair trial standards under international law.
It was reported that they were subjected to torture while earlier it was announced that another defendant had died under torture, they were forced to sign confessions and were denied their right to legal aid at several stages of the proceedings. The request of the young defendant's lawyer for a medical examination to verify his age was refused, in clear violation of Yemeni law and human rights standards.
In the context of any armed conflict, executions without judicial guarantees are a violation of international humanitarian law and also constitute a war crime.

Deadly attacks
The OHCHR expressed concern about the repeated use of drones and missile attacks by the Houthis and the Saudi-led coalition, which have resulted in civilian casualties and damage or destruction of civilian property.
The Commission condemned a Saudi-led coalition airstrike targeting a car on Saturday, 18 September, in Aqabat al-Qana'a in Olaya Markha district, Shabwa governorate, which killed five members of a family, including two children.
On 11 September, a reported Houthi drone and missile attack on the seaport of Mocha destroyed several warehouses containing humanitarian aid, as well as houses and medical facilities.
UNHCR recalled that any attack on civilian objects or civilians not directly participating in hostilities can constitute a war crime, calling on all parties to comply with their obligations under international humanitarian law and to investigate and hold accountable those responsible for any violations.

Crackdown on protesters
In southern Yemen, where UAE proxy forces are in control, security forces affiliated with the UAE-backed Transitional South Council authorities reportedly used unnecessary and disproportionate force against demonstrators protesting against deteriorating living conditions and lack of public services.
On 15 September, police in several areas of Aden used live ammunition to disperse demonstrators and two people, including children, were shot dead and others were injured after police opened fire indiscriminately.
In another disturbing incident on 8 September, young Abdul Malik al-Sayani, who had just returned to Yemen from the United States, was robbed and then shot at a checkpoint set up by a Southern Transitional Council unit in Lahj governorate.
Alkarama has documented numerous cases of abductions, enforced disappearances and killings in areas belonging to Transitional Council forces supported by the United Arab Emirates.
The Commission reaffirmed that any armed conflict, or declared state of emergency or curfew, does not relieve governments or de facto authorities of their obligations under international human rights law and international humanitarian law.