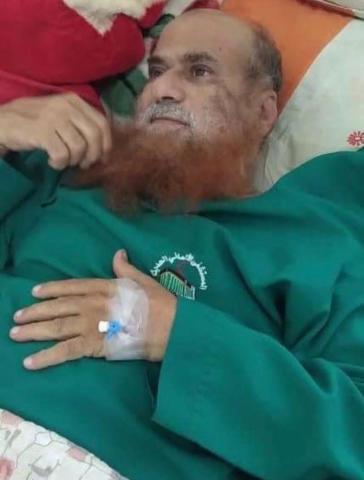 Today, Wednesday 18 November 2020, Alkarama wrote to the Working Group on Enforced and Involuntary Disappearances, asking it to intervene on behalf of the Yemeni preacher, Abdul Qadir Al-Badiji (Al-Shaibani), who has been missing since 30 October in the southern Yemeni city of Aden.
Armed men in the city of Aden, who seem to be members of the UAE-backed security belt forces controlling the city, abducted Mr. Abdul Qadir Al-Shaibani, 65 years old, and took him in front of his wife and one of his children to an unknown destination.
The various regions of Yemen have turned into an open theater of chaos, kidnappings and killings, especially those areas where the UAE has established parallel military formations that are not subject to Yemeni state institutions and which, according to a UN report, work by proxy for the UAE and Saudi Arabia.
According to his family, on October 30, Sheikh Abd al-Qadir Ali Abdullah al-Buthaji al-Shaibani,  accompanied by his wife and one of his children on his way to the provisional capital Aden, en route to Cairo as last destination to complete medical treatment, masked gunmen in two cars kidnapped him in the Mansoura neighborhood after firing into the air to terrorize his family and take him to an unknown destination.
Two days earlier, security forces raided the hotel where Sheikh Al-Shaibani lives and abducted an elderly detainee, only to release him the next day. It appeared that the kidnappers had the wrong target, but they eventually returned and abducted Al-Shaibani later on a street in the city.
Sheikh Al-Shaibani was born in 1955, he is a humanitarian actor in Yemen, one of the founders of the humanitarian association Al-Hikma and the vice-president of the Shura Council, the Party for Peace and Development.
He has been suffering from several chronic illnesses including a brain tumor and a hip joint for about ten years and has undergone several operations in the last three months.
The Yemeni human rights organization, Sam, has held the Security Belt Forces, which has been controlling security in Aden Governorate since August 2019 and until today, responsible for the integrity of Al-Shaibani. It demanded his immediate release and an end to the continuous violations of citizens' freedoms by the security belt, adding that "the hijacking by the security belt forces of the Aden airport road was a trap to catch and disappear the travelers, which is irresponsible."
Yemeni political parties have issued a statement denouncing the crime of kidnapping, as has the Yemeni Researchers Association, which has also issued a statement to this effect, but the victim is still under enforced disappearance, while his family says it is very concerned about his fate.
Alkarama reminds all parties involved in the armed conflict in Yemen of their obligations under international humanitarian law and international human rights law, and urges everyone to respect their responsibilities in this regard and to respect human rights, foremost among which are the right to life, physical and moral integrity, and freedom of movement.