Yemen: Alkarama shares OHCHR’s concern about the impact on civilians of the escalating violence 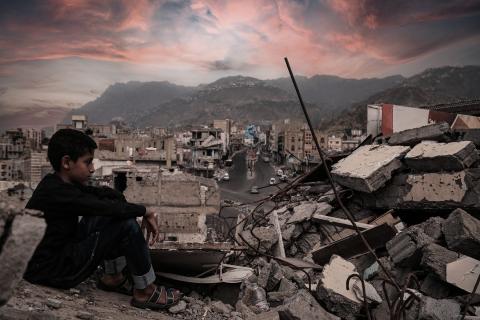 Alkarama shares the concern of the Office of the United Nations High Commissioner for Human Rights (OHCHR) regarding the devastating effects of the escalation of the conflict in Yemen. Human rights and international humanitarian law violations by all parties to the conflict are even more alarming that they continue to affect civilians.

The United Nations High Commissioner for Human Rights said in a statement issued dated 28 January 2022 that the Saudi-led coalition had launched three consecutive airstrikes on  21 January 2022. The attacks had hit a detention centre run by the Houthi group, who call themselves "Ansar Allah", in the northern city of Sa'ada, killing around 91 people and injuring at least 236.

Alkarama is following with concern the persistent climate of impunity for international crimes committed in the country, after more than seven years of war. In the past years, many individual complaints were filed with the relevant United Nations human rights mechanisms. Furthermore, in the context of Yemen's third Universal Periodic Review, Alkarama highlighted in it shadow report issues such as the lack of impartiality and effectiveness of the National Commission of Inquiry established in 2015 to investigate violations committed by all parties to the conflict, as well as the lack of cooperation of authorities with UN human rights mechanisms, including the Committee against Torture.  Alkarama brought forward a set of recommendations to strengthen Yemen's compliance with its obligations under international humanitarian and human rights law. It highlighted violations committed against the civilian population by various parties to the ongoing conflict, and violations of international humanitarian law committed by US and UAE forces in their counter-terrorism operations. Moreover, concern was raised on the systematic use of arbitrary detention, enforced disappearance and torture, against journalists, human rights defenders, and politicians.

The OHCHR recently declared that in 2021, the United Nations recorded that the Saudi-led coalition carried out about 600 monthly airstrikes, hitting all parts of Yemen. During the same year, Houthi rebels carried out 340 missile and drone attacks on the territory of the Kingdom of Saudi Arabia. The High Commissioner added that since the beginning of 2022 and up to 26 January, the coalition has carried out 1,403 airstrikes.  Another 39 cross-border attacks were carried out by the Houthis, some against the UAE, but most were directed against Saudi Arabia.

While the Houthi group continues to carry out indiscriminate attacks on civilian neighborhoods and populated settlements across many Yemeni cities, dozens of civilians have been victims of the mines they massively dispersed across the country. Just over the past week, Alkarama has documented three separate deadly attacks by the Houthi movement against civilians. The first one in Taiz killed a woman and seriously wounded another when a shell fell on a remote house in Bilad Al-Wafi located in the Jabal Habashi, west of Taiz. The second attack in Ma’rib, home to the largest concentration of internally displaced persons, killed three civilians and injured nine others, while the third one targeted a house in the village of Al-Baghil, south of Al-Hodeidah. The latter killed and injured three civilians from the same family, including a girl who had her legs amputated because of her injuries.

This comes as the Security Council's Panel of Experts on Yemen warned in its latest report released a few days ago that impunity has become the rule rather than the exception with regard to human rights violations and violations of international humanitarian law in Yemen. The report also highlighted the numerous violations committed by the parties to the conflict in Yemen. It also highlighted that the Houthis’ continued attacks on Ma’rib have had serious consequences for the civilian population, in particular for internally displaced persons.