Yemen: Alkarama and other organizations address the United Nations on collective executions 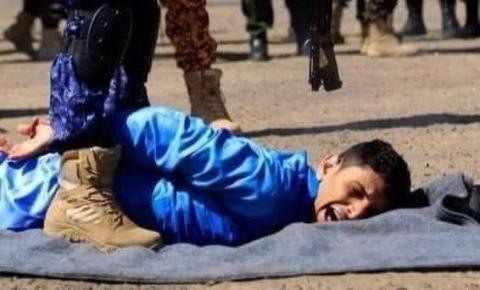 Alkarama and the Cairo Centre for Human Rights Studies, along with Yemeni human rights organisations, issued an urgent appeal to the UN Special Procedures on 24 September, regarding the implementation of the de facto authorities in Sana'a, the Houthi group "Ansar Allah. The appeal also concerns the unlawful sentencing to death of 9 Yemenis and the request for urgent intervention to stop arbitrary executions of detainees, as well as to address arbitrary detention by all parties to the conflict.
The organisations stress that since the beginning of the war in 2014, Yemen has witnessed the involvement of all parties to the conflict in the practice of grave violations of the human rights of Yemenis.
On 18 September 2021, the authorities of the Houthi group "Ansar Allah" executed nine civilians after the specialised criminal court - under the control of the group - had handed down death sentences against them in previous years. They are : Ali Ali Ibrahim Al-Quzi (43), Abdul Malik Ahmed Muhammad Hamid (55), Muhammad Khaled Ali Haig Al-Omar (34), Muhammad Ibrahim Ali Al-Quzi (46), Muhammad Yahya Muhammad Noah (46), Ibrahim Muhammad Abdullah Aqel (44), Muhammad Muhammad Ali al-Mashkhari (47), Muadh Abd al-Rahman Abdullah Abbas (23) and Abdulaziz Ali Muhammad al-Aswad (17 at the time of arrest). The execution took place in the presence of hundreds of participants in a public square, accompanied by singing and dancing. The implementation of these death sentences represents a critical moment that opens the door to the continuation of this type of action by the de facto authorities. In particular, the execution of Abd al-Aziz al-Aswad is of great concern. He was 17 years old at the time of his arrest.
The Houthi authorities had arrested the victims amid allegations of their involvement in the assassination of Saleh Al-Sammad, the former head of the de facto authority's Supreme Political Council, who was killed in April 2018 in Hodeidah governorate by an airstrike by coalition forces led by Saudi Arabia and the United Arab Emirates. On separate days in July and November 2018, the Houthi group arbitrarily detained the victims and ten civilians were arrested and forcibly disappeared. In order to extract confessions, the victims were subjected to torture, which resulted in the death of the tenth detainee, Ali Abdo Kazaba (23), on 7 August 2019.

Enforced disappearance and torture
During the victims' detention, their place of detention was unknown and on the rare occasions when their relatives were allowed to visit them, the detainees were taken from their secret place of detention to the seat of the court where they were being tried. A day before the execution, the families and relatives of the detainees were due to visit the detainees, but the families and relatives asked to postpone the visit for another day due to the lack of time and the distance between Hodeidah, the families' home, and Sana'a, but the prosecution refused to postpone the visit, confirming that the death sentence would be carried out on the scheduled date of 18 September.

Unfair show trial
The organisations claim that the victims' trial was marred by numerous flaws during the basic proceedings, such as the extraction of confessions under torture, the failure to investigate the victims' denials, the dismissal of appeals, the prevention of lawyers from attending investigation sessions, and many others included in the case filed.  The trial phase witnessed a continuous and unjustified restriction of the rights of the accused and their defence representatives, as they were deprived of their right to defence. The Court of First Instance set three consecutive sessions over a period of only two weeks. And when the defendants' defence requested a change of judge due to a deliberate violation of the right to defence, after having issued a decision to change the case and claiming facts and actions contrary to the indictment; the judge decided to reserve the case for trial without giving the defendants and their defence representatives the opportunity to present their evidence in defence.
Despite the appeals made by the defendants and their lawyers to the Court of Appeal, and the essential aspects of the defence they raised, and their request to the Court of Appeal to allow them to prove their innocence and incriminate them and to present aspects of their defence and rebut the prosecution's evidence with their substantive claims to reveal the truth, the court rejected the claims and refrained from hearing their evidence and defences, and the case was reserved for trial, confirming the violation of the defendants' right to defence and fair trial.
The victims' lawyer, Abdul Majeed Sabra, said: "I was shocked when the prosecutor informed me of the decision. As the defence lawyer in this case, I can confirm that the case was marred by serious violations, including violations of the law, which makes it null and void; it did not meet the basic criteria of a fair trial. Since I have the details of the case, I know with certainty that these defendants are innocent of any involvement in the killing of Saleh Al-Sammad and his companions."
According to the Office of the High Commissioner for Human Rights, international law sets out very strict conditions for the application of the death penalty, including that it must meet the standards of a fair trial and due process. It also categorically prohibits the execution of juvenile offenders, regardless of the circumstances and nature of the crime committed. In the context of armed conflict, carrying out executions without judicial safeguards is a violation of international humanitarian law and constitutes a war crime," he added.

Report of the Group of Experts
In its latest report, the Eminent Persons' Group continued to investigate and report on "disappearances, arbitrary detentions and/or torture of journalists, human rights defenders and religious minorities, and the practices of parties to the conflict to silence their alleged dissent or to punish them for their religious beliefs and to legitimise their power through the propagation of fear".  The report also stresses that "such acts may constitute war crimes, including cruel treatment, torture and outrages upon personal dignity".
The organisations express their rejection and condemnation of the tainted violations that have marred the proceedings from the outset, including enforced disappearances and torture, through the violations that marred the court hearings, and culminating in the swift execution of the death sentence, as well as the swift approval of this appeal ruling by the Supreme Court in less than 27 days, and before the defendants were given the opportunity to lodge appeals in cassation against the appeal ruling. The organisations say that this case reflects the real tendency of the Houthi judiciary to carry out the death penalty, regardless of the defendants' ability to exercise their legal right to defend themselves.
The organisations stress that the restrictions imposed by the Houthi group "Ansar Allah" against activists and civilians violate the Universal Declaration of Human Rights, the International Covenant on Civil and Political Rights, the Second Optional Protocol to the International Covenant on Civil and Political Rights of 1989, to which Yemen has acceded, and other rights and obligations that guarantee the right to life, to physical integrity and to a fair trial, and also violates the text of the International Convention for the Protection of Persons from Enforced Disappearance, which was adopted by the United Nations General Assembly on 20 December 2006, which states that "no one shall be subjected to enforced disappearance", and at the same time affirms that "widespread or systematic enforced disappearances constitute a crime against humanity. "
The organisations reaffirm that international humanitarian law and relevant international conventions oblige all parties to the conflict to respect legal rules that guarantee the protection of civilians and prohibit violations of the right to life and physical integrity of individuals. It also criminalises arbitrary detention, enforced disappearances and torture, and emphasises the right of defendants to a fair trial.
Today, dozens of Yemenis have been sentenced to death by the de facto authority, including academics and four journalists whom Alkarama has worked on: Akram Al-Walidi, Abdul-Khaleq Omran, Harith Hamid, Tawfiq Al-Mansoori, and others. The human rights organisations signatory to this appeal call on the UN Special Procedures to urgently intervene by
- Condemning the extrajudicial executions in Yemen, including the execution of the nine civilians without due process on 18 September 2021 by the Houthis who call themselves "Ansar Allah".
- Demanding the cancellation of death sentences against Yemenis arbitrarily detained and sentenced to death without fair trial.
- Demanding that the Houthi "Ansar Allah" authorities end the use of arbitrary death sentences, arbitrary detention and enforced disappearances, which are gross violations of international law.
- Closely monitoring the status of the execution of the death penalty and the death penalty in Yemen, in particular with concerns about the focus on the implementation of a series of death sentences handed down by the Specialised Criminal Court and other courts.
- Calling on the relevant local and international bodies to investigate the case in the broader context of arbitrary detention and the use of torture to extract confessions.
- Calling on the international community to establish a crime-oriented investigation mechanism, as recommended by the Eminent Persons' Group, with a mandate to create records for use by the relevant prosecuting authorities.