UAE: ALKARAMA PARTICIPATES IN THE NGO BRIEFING AHEAD OF THE UAE INITIAL REVIEW BY THE COMMITTEE AGAINST TORTURE 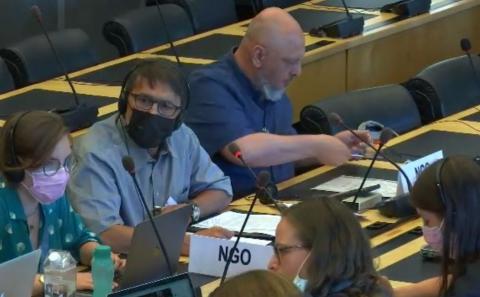 On Tuesday 12 July 2022, Alkarama participated in the NGO briefing held at the Office of the High Commissioner for Human Rights (OHCHR) in Geneva ahead of the initial review of the United Arab Emirates (UAE) by the UN Committee against Torture (CAT) during its 74th session to be held from 13 July to 14 July 2022. This will be the first review of the State Party since its ratification of the Convention in 2012.

Composed of ten independent experts, the CAT monitors the implementation of the Convention against Torture and Other Cruel, Inhuman or Degrading Treatment or Punishment by States Parties through periodic reviews.

The NGO briefing is an opportunity for civil society representatives to address directly the Committee's experts, on the eve of the review, in order to express their main concerns and make recommendations to the State party.

In its alternative report, Alkarama had drawn the attention of the experts to the seriousness of the human rights situation in the country and raised, among other issues, systematic torture and impunity of perpetrators, issues related to the anti-terrorism law, the admissibility by the courts of confessions extracted under torture, and violations committed in Yemen.

During the briefing, Alkarama's director, Mr Rachid MESLI, drew the Committee's attention to violations of Article 3 of the Convention through the particular case of Mr Amjad Mohammad Nour Aldeen AL NASSER, a Syrian citizen who is at risk of imminent forced removal to Syria and for whom Alkarama submitted an urgent appeal to the Special procedures on 22 June.

As a recall, Mr Al Nasser worked as a truck driver and had fled Syria for a year for political reasons. He was arrested on 26 April 2022 by the intelligence services and after a month of enforced disappearance reappeared at the Sweihan detention centre in Abu Dhabi. He has been notified of his forcible return to his country, which he fled at the request of the Syrian authorities, and has no possibility to legally challenge his forcible return to a country where he is clearly at risk of torture.

Mr. Mesli invited the experts to call on the State party to respect its commitments under article 3 of the Convention by refraining from returning Al Nasser to Syria, but also to establish a legal procedure in its judicial system to challenge extradition or forced removal.

In addition, Alkarama's director highlighted the arbitrary detentions that continue in the "Munasaha" centers (centers for "counselling" or religious or moral rehabilitation). He recalled that the Anti-Terrorism Law 7/2014 allows the incarceration of a person under the pretext of presenting a "terrorist threat" in these centers for an indefinite period.

At the same time, he highlighted the situation of political opponents in the case of the 94, where the victims arrested in 2012 have already spent 10 years in prison after a trial before an exceptional court and considered unfair by the Working Group on Arbitrary Detention (WGAD). The victims had already suffered the worst torture after their arrests because of their political views.

Finally, Mr. Mesli recommended that the State party put an end to arbitrary and indefinite deprivations of liberty, which may amount to cruel, inhuman and degrading treatment, and to release without delay all persons who have served their full sentences.

To follow the initial review of the United Arab Emirates: https://media.un.org/en/webtv