SUDAN: The arbitrary detentions of Ibrahim GHANDOUR and Mohamed AL JAZOULI before the UN Working Group 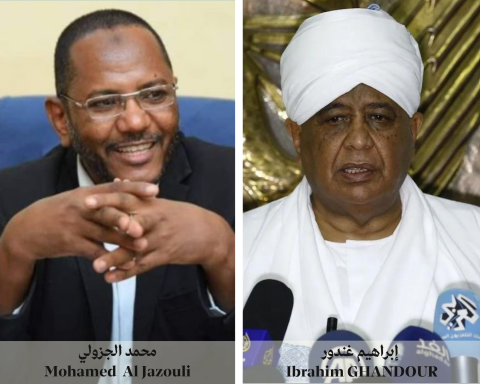 On 4 February 2022, Alkarama submitted to the UN Working Group on Arbitrary Detention the situation of the former Minister of Foreign Affairs, Mr. Ibrahim Ahmed Abdelaziz Ghandour and the leader of the State of Law and Development Party, Mr. Mohamed Ali Abdalla Al Jazouli, arbitrarily arrested in 2020 by the security services led by the head of the army, Lieutenant-General Abdel Fattah Al Burhan.

Arbitrary arrests and detentions in Sudan have increased since the overthrow of President Omar Al Bashir and the establishment of a Transitional Military Council headed by Abdel Fattah Al Burhan. While the latter had announced that elections would be held after a three-year transition period, he declared a state of emergency on October 25. The general then announced the dissolution of the transitional authorities.

Since then, Sudan has been in the grip of an acute political crisis. Peaceful demonstrations by the population calling for the immediate lifting of the state of emergency and the cancellation of all emergency measures have been violently repressed by the army. In recent months, the country has been marked by further restrictions on individual and collective freedoms and a wave of arrests of political and civil society figures.

Mr. Ghandour was arrested on June 29, 2020, at his home by security forces affiliated with the "Council" headed by the army commander, Lieutenant-General Abdel-Fattah Al-Burhan. After arresting him without a warrant and without notifying him of the reasons for his arrest, the security forces took him to the police headquarters in Khartoum.

After several days of incommunicado detention, he was allowed to contact his relatives to inform them of his detention. However, he had to wait several months before he was authorized to receive visits from his family and his lawyer. In October 2020, he was transferred to Kober prison in Bahri, Khartoum, a prison known for holding prisoners of conscience and political opponents. On an unspecified date, he was transferred again to the headquarters of the intelligence services in Shandi Park (Khartoum) where he is currently detained. It was not until several weeks after his arrest that Mr. Ghandour was briefly informed that he was charged with "undermining the constitutional order”.

On October 30, 2021, in the absence of any official charges, the Khartoum public prosecutor, at the request of the families of the victims, issued a release order for several arbitrarily arrested individuals, including Mr. Ghandour. However, the army commander dismissed the magistrate and appointed a new one who immediately issued a detention order.

In response to their arbitrary deprivation of liberty, many political detainees, including Mr. Ghandour, went on hunger strike to demand the trial of their case without further delay.

On July 14, 2020, Mr. Al Jazouli was arrested in front of his home by several members of the security forces in civilian clothes and heavily armed, without a warrant and without being notified of the reasons for his arrest; he was taken to the headquarters of the intelligence services in Khartoum.

After a week of incommunicado detention, he was allowed to inform his relatives of his arrest but was not allowed to tell them his place of detention. During this time, his family tried in vain to find out about his fate from the police, military and intelligence services.

Finally, two months later, the intelligence services acknowledged his detention. On December 8, 2020, he was transferred to Al Huda prison (Khartoum) where he was interrogated by members of the intelligence services, without the presence of his lawyer. It was not until almost a year later that a lawyer was able to visit him and file a petition challenging the legality of his detention, which was however rejected. Today, Mr. Al Jazouli remains in prison without any legal proceedings.

In the absence of any legal basis for his detention, Mr. Al Jazouli was also the subject on October 30, 2021 of the same release decision made by the Attorney General of Khartoum, which was overturned by the head of the army. In protest, he went on hunger strike like other political prisoners.

On 4 February 2021, Alkarama addressed the Working Group on Arbitrary Detention on the grounds that the arrest and detention of Mr. Ghandour and Mr. Al Jazouli were contrary to domestic legislation and the provisions of the International Covenant on Civil and Political Rights (ICCPR) ratified by Sudan on 18 March 1986.

After their arrest, they were held incommunicado and prohibited from contacting their families to inform them in clear violation of Article 83 (5) of the Criminal Procedure Law of 1991 and the Body of Principles for the Protection of All Persons under Any Form of Detention or Imprisonment, which provides that individuals, upon arrest, have the right to inform third parties. In addition to not being informed of the charges against them, they were deprived of their right to meet with a lawyer, in violation of section 83 (3) of the Criminal Procedure Act of 1991.

In addition, the two victims, who are well-known political figures, had peacefully expressed their opinions on social networks. In one of these tweets, Mr. Al Jazouli warned against UAE interference in the Sudanese revolution and stated that any political exclusion would prolong the rule of the military.

It is likely that the only reason the two men were arrested was for peacefully expressing their views as part of their right to freedom of opinion and expression guaranteed by article 19 of the Covenant.

Finally, since their arrest, none of the victims have been brought promptly before a judge, in serious violation of their right to a fair trial and due process as guaranteed by article 14 of the Covenant.

According to the consistent jurisprudence of the UN Human Rights Committee, 48 hours is generally sufficient time to transport the individual and prepare for the judicial hearing and that any delay beyond 48 hours must remain absolutely exceptional and justified by the circumstances. However, so far none of the victims have been brought before a judge.

Alkarama therefore called on the Working Group to note that the deprivation of liberty of Mr. Ghandour and Mr. Al Jazouli is arbitrary and in violation of both domestic legal provisions and articles 9, 14, 19 and 20 of the International Covenant on Civil and Political Rights and to urge the State party to immediately take the necessary measures to remedy this situation by releasing them without delay.