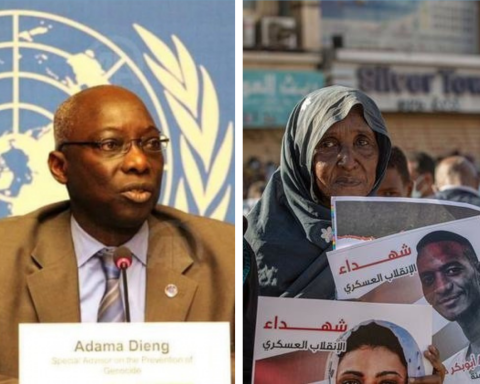 Alkarama supports the call of the UN expert on the situation of human rights in Sudan, Adama Diang, to end the excessive use of force against peaceful protesters, lift the state of emergency in the country, release all remaining protesters and activists as well as investigate promptly and impartially all allegations of human rights violations.
The UN expert's call came at the end of a recent visit to the country, during which he met with government officials, civil society representatives and human rights defenders. He stressed the need for Sudanese forces to stop firing live ammunition and tear gas at protesters.
The UN expert expressed concern about the repeated use of excessive force and live ammunition by security forces against protesters since the October 25 coup. He highlighted that at least 82 people have been killed and 2,000 injured, while many others — most of them women — have been subjected to sexual violence.
The expert also expressed concern about the negative effects of the state of emergency on human rights as well as attacks on medical facilities and health workers, harassment of media and journalists, arbitrary arrests and detentions of protesters and human rights activists, and the use of torture and other ill-treatment.
Alkarama’s action
Alkarama continues to express its deep concern about the human rights situation in the Sudan and regularly monitors cases of political detainees, documenting them to the attention of United Nations special procedures.
Early February 2022, Alkarama seized the UN Working Group on Arbitrary Detention regarding the cases of former Foreign Minister Ibrahim Ahmed Abdelaziz Ghandour and the head of the Rule of Law and Development Party Mohamed Ali Abdalla Al-Jazouli. . They were arbitrarily arrested in 2020 by security services led by army commander Lt. Gen. Abdel Fattah Al-Burhan.
Since the overthrow of President Omar al-Bashir and the establishment of the Transitional Military Council led by Abdel Fattah al-Burhan, Sudan has seen a double escalation of arbitrary arrests and detentions. Although the latter announced the organisation of elections after a three-year transition period, on 25 October 2021 he nevertheless declared the state of emergency and dissolved the transitional authorities.
Since then, Sudan has been going through a severe political crisis, fuelled by the armed forces' crackdown on peaceful protests calling for the immediate lifting of the state of emergency and related special measures. These include new restrictions on individual and collective freedoms and waves of arbitrary arrests of politicians and civil society activists.