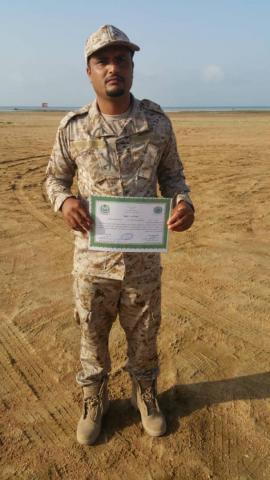 On November 12, 2019, Alkarama submitted to the UN Special Rapporteur on extrajudicial, summary or arbitrary executions, Agnes Callamard, the case of Yemeni Officer Ibrahim al-Shamsani, tortured to death in a Saudi Arabian prison, as confirmed by a coroner's report.
Ibrahim Mohammed Mahyoub Saeed Al-Shamsani, 35, a lieutenant in the Yemeni Coast Guard, was involved in military operations against the Houthis, and took over a patrolling mission to protect Yemeni ports, based at Hodeidah Port. He was part of the first class of trainees in Jazan region, Southwest corner of Saudi Arabia, and received certificates in several military courses.
Shamsani  was arrested on the Yemeni island of Miyun overlooking the Strait of Bab al-Mandab and taken to a Saudi barge and then to a prison in Jazan.
His family does not know the exact date of his arrest, but reports that their last contact with him was by telephone during his military service on the island of Miyun, on June 17, 2019.
On July 31, 2019, his family was surprised by a letter from a Yemeni officer stating that they had received a memo from Saudi intelligence that Shamsani  committed suicide by hanging in Jazan prison. His family never received before this date any confirmation that he was being held by the Saudis.
According to Shamsani ’s colleagues, Saudi and Yemeni officers arrested him while serving on the island of Miyun. They covered his face, then took him to a Saudi navy barge belonging to the Western Naval Fleet in the Saudi territorial waters, and then to a Saudi prison of the Saudi Navy in Jazan. .
Immediately after receiving the news of his death in Jazan prison, his family demanded that his body be returned to them. After much efforts and the intervention of Yemeni military leaders, Saudi authorities eventually agreed to return the body to the family in Aden on September 19, 2019.
AlKarama obtained a copy of the forensic report, and also received shocking photographs showing the effects of torture on the victim's limbs, including nail removal and bruising on the soles of the feet. The forensic report states that al-Shamsani's death was caused by a strangulation by a sharp object.
"Shamsani ’s family does not know the reason for the arrest and torture until his death, but it is possible, according to some of his colleagues, that the Saudis suspected him of leaking information to the Houthis," says lawyer Rachid Mesli, Alkarama's Legal Director.
"This crime adds to the record of horrific human rights violations committed by the Saudi authorities and demonstrates a systematic behavior in of contempt human rights law," he added.
Shamsani ’s family informed the media about the killing which created bitter indication in Yemeni public opinion. The family also sought Alkarama’s assistance to hold the Saudi government accountable for the torture and death of Shamsani .
Yousef al-Shamsani, the brother of the victim, said: "We ask you to do what is necessary to publicize the case and investigate this crime. We want to know exactly who are the perpetrators of this hideous crime and bring them to justice".
The family also organized a vigil after the funeral which was attended by hundreds from his village and Taiz governorate. In front of the Local Authority Building in Taiz the crowd conveyed a strong message to the Saudi authorities, asking that the perpetrators of the crime be held accountable.
Yemen has witnessed horrific human rights abuses for nearly five years and various parties to the conflict are involved in war crimes and crimes against humanity, according to a panel of leading international and regional experts on Yemen.