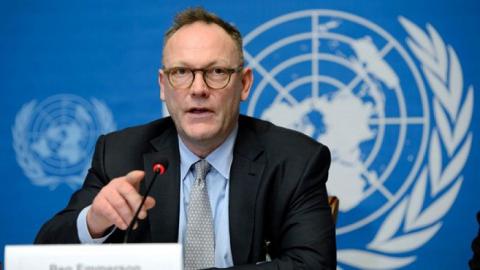 During his stay, Emmerson visited Dhahban and Al Ha’ir Prison as well as the Mohammed Bin Naif Counselling and Care Centre and met with heads and personnel of governmental institutions, individuals accused and convicted of terrorist crimes and their families. Alkarama assisted the team of the Special Rapporteur prior and throughout their visit by providing relevant information on legal shortcomings and human rights violations committed in the context of counterterrorism.

During a press conference held at the end of the visit, the Special Rapporteur raised a number of concerns, including the unacceptably broad definition of terrorism, which does not comply with international human rights standards, since it enables the criminalisation of a wide spectrum of acts of peaceful expression and the prosecution of human rights defenders, writers, bloggers journalists and any other peaceful dissenting voices, who are viewed by the authorities as endangering “national unity” or undermining “the reputation or position of the State”.

The Rapporteur raised the prosecution and arbitrary detention of human rights defenders under the pretext of the fight against terrorism. He handed to the government a list of priority cases for urgent review, among which Sheikh Suliaman Al Rashudi, Abdullah Al Hamid, Mohammed Al Qahtani, Abdulkareem Yousef Al Khoder, Mohammed Saleh Al Bajadi, Omar Al Sa’id, Raif Badawi, Fadhel Al Manasif and Waleed Abu Al Khair, whose detention was declared arbitrary by the UN Working Group on Arbitrary Detention (WGAD) in its Opinion No. 38/2015. Moreover, he urged the Saudi authorities to “establish an Independent National Security and Due Process Review Mechanism to re-examine all cases in which individuals are currently serving sentences of imprisonment based on acts which constitute the exercise of free speech, freedom of thought, conscience, religion or opinion, or the right to freedom of peaceful assembly and association and to commute or pardon all such prisoners with immediate effect”.

Furthermore, the Special Rapporteur regretted that during his prison visits, the Saudi the government was unable to give access to any of the individuals whose names he provided to be interviewed and were sentenced under national security charges for their peaceful activism.

Moreover, Emmerson expressed concerns about the torture of terrorist suspects during investigation as well as the reported use of confessions obtained under torture, the failure to launch effective investigations and the application of the death penalty following proceedings that fail to comply with international fair trial standards. Hence, he suggested that the government extend an invitation to the Special Rapporteur on Torture (SRT), Dr Nils Melzer.

Lastly, the Special Rapporteur articulated the need for greater transparency about civilian casualties in Saudi Arabia’s extra-territorial counter-terrorism operation in Yemen, calling for an independent fact finding investigation into all civilian deaths.