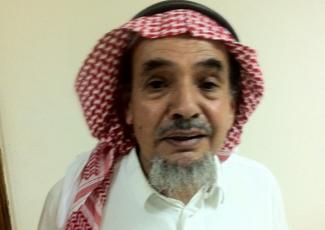 Today, Friday, April 24, 2020, Alkarama informed the United Nations about the death of prominent Saudi human rights defender Dr. Abdullah Al-Hamid "Abu Bilal", calling on it to take a position regarding the fate of an exceptional figure who vowed his life to peacefully work for freedoms, justice, political reform and human rights in Saudi Arabia. .
Alkarama expresses its shock at the death of as a result of deliberate medical negligence by the Saudi authorities, despite the repeated warnings about his life, until he suffered a stroke a few days ago in the infamous al-Ha'ir prison.  Dr. Al-Hamid remained in coma for several hours in the prison before transferred to the hospital, where it was announced he passed away today.
Al-Hamid was born on the 12 July 1950, and hold a PhD in literature. He pursued and academic career and engaged for the last twenty years in a peaceful struggle calling for political reforms for political reforms in Saudi Arabia, particularly by seeking to establish a high rights organization in the country.
Al-Hamid, together with fellow Saudi human rights defenders, established the Association for Civil and Political Rights (ACPRA) in 2009, and was arrested six times, most recently in March 2013, where he was sentenced to 11 years in prison for engaging in human rights work. ACPRA was never recognized by the Saudi authorities and was ultimately banned with all its members sentenced to long prison terms.
Al-Hamid has been known for his strong adherence to the peaceful approach to change, his deep reform vision and enlightened thought. Because of this, he suffered excessive and inhuman treatment from the Saudi authorities. As his health deteriorated, due to the harsh prison environment, and in spite of his age, the Saudi authorities refused to release him or even giving him access to more human detention conditions.
Throughout the years,  Alkarama had submitted several communications to the United Nations human rights mechanisms, especially the Special Rapporteur on the independence of the judiciary, on human rights defenders, the Special Rapporteur on freedom of expression, on freedom of peaceful assembly and association, as well as the Working Group on arbitrary detention, asking them to intervene with the Saudi authorities and demand the immediate release of Dr. Abdullah Al-Hamid and his companions and stop the harassment of human rights activists.
The UN mechanisms issued many opinions and calls confirming the arbitrary detention of al-Hamid and his companions, demanding their release.