Saudi Arabia: Alkarama submits its list of issues in vieww of the kingdom’s 3rd periodic review by the Committee against Torture 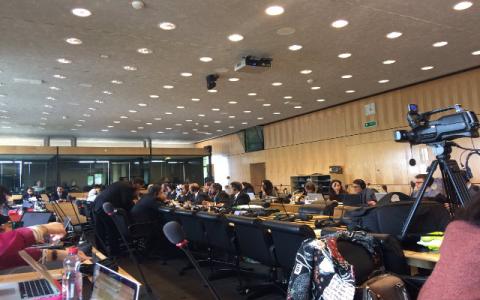 Alkarama submitted its report on Saudi Arabia to the Committee against Torture. The report expresses key concerns regarding the serious violations committed in the country since its 2016 periodic review.

Saudi Arabia is being reviewed by the United Nations Committee against Torture (CAT), which is assessing the country's compliance with its obligations under the Convention against Torture and Other Cruel, Inhuman or Degrading Treatment or Punishment (UNCAT), ratified by the Kingdom on 23 September 1993. Alkarama's report reacts to the Committee's announcement of the list of issues to be treated by the State Party in the framework of its third periodic review.

The list of issues is drawn up by the Committee on the basis of information contained in reports submitted by the State party and NGOs. It aims to ensure a constructive dialogue with the State party during its next periodic review, by inviting the State party to provide clarification on specific issues regarding its compliance with the Convention.

In its report, Alkarama called on the Committee to raise with Saudi Arabia the situation of human rights defenders sentenced to long prison terms. The Committee will convey these concerns to the Kingdom's representatives who are expected to provide a clarification on the authorities' intention to release prisoners arbitrarily detained for their peaceful criticism of the authorities or for defending human rights. Such prisoners include Saud Mukhtar al-Hashimi, Suleiman al-Rashudi, Khalid al-Rashid, Muhammad Abdullah al-Otaibi, Muhammad al-Qahtani and Waleed Abu al-Khair.

Alkarama had reminded the Committee of the need to investigate the fate of these prominent figures, all of whom have been arbitrarily deprived of their liberty and detained despite requests for their release by the United Nations Working Group on Arbitrary Detention. Based on the complaints submitted by Alkarama, the Working Group has issued several opinions confirming the arbitrary nature of their detention.

The Committee also raised the case of Safar bin Abdul Rahman Al-Hawali, who is being arbitrarily detained for publishing a book critical of Saudi Crown Prince Mohammed bin Salman's foreign policy choices, offering him a number of recommendations. Alkarama has also referred Al-Hawali's case to the Committee on the Rights of Persons with Disabilities due to his health condition.

Systematic use of torture

In this context, the Committee will also seek to clarify the conditions of detention and the allegations concerning the systematic practice of torture in the premises of the General Intelligence Service of the Ministry of the Interior.

Alkarama had already drawn the Committee's attention to the systematic practice of arbitrary and incommunicado detention, noting that detainees face torture and ill-treatment in retaliation for their public criticism of the royal authorities or their participation in peaceful demonstrations.

Among the most important cases demonstrating these practices, the Committee mentioned in its list of issues the case of Dr Salman al-Awda, who has been subjected to severe physical and psychological torture since his arrest.

Saudi Arabia will also be asked to provide clarification regarding national law, namely whether the "crime of torture and the various forms of participation in it" would be incorporated "into national legislation, in accordance with the definition given in Article 1 of the Convention, with appropriate penalties that take into account the gravity of the crime.

Over the past few years, Alkarama has consistently brought attention to the practice of torture in Saudi prisons. To date, none of the allegations of torture have been impartially investigated or resulted in the punishment of the perpetrators.

In its list of questions, Alkarama noted that the impunity of torturers is partly due to the structure of the Ministry of Interior's intelligence services responsible for the investigation and monitoring of Saudi prisons.

Finally, based on Alkarama's proposal, the UN body invited the State party to submit annual statistics from 2016 to date on the number of complaints filed with the competent authorities, the investigations carried out and their results.

The Committee against Torture published its concluding observations on 13 May 2016, following consideration of the second periodic report of the Kingdom of Saudi Arabia (CAT/C/SAU/2) and the review sessions held on 22 and 25 April 2016. In this context, Alkarama in turn provided its list of issues and shadow report to the committee's experts to assess Saudi Arabia's compliance with the convention. The Committee's recommendations largely reflected the main points raised by Alkarama.

Following the second periodic review, Alkarama launched a follow-up programme in collaboration with Saudi civil society for the implementation of all the Committee's recommendations. Alkarama submitted its first follow-up report to the Committee against Torture on 2 June 2017, in which it regretfully demonstrated that the Kingdom of Saudi Arabia had not implemented any of its recommendations.