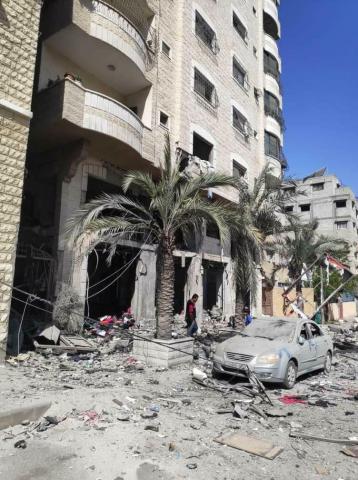 In a joint statement, United Nations human rights experts condemned the forced eviction of Palestinian families from their homes in the Sheikh Jarrah and Silwan neighborhoods in occupied East Jerusalem, and considered this as the spark that ignited the fuse of an all-out war.
The experts urged the commitment to a credible negotiation process aimed at achieving sustainable peace within the framework of international law and human rights, ending the occupation of Palestinian lands, forced evictions, home demolitions, arbitrary displacement, illegal population transfer and construction of illegal settlements in the occupied territories.
In the statement, they called for addressing the discrimination and segregation suffered by the residents of the occupied territories as well as many Palestinian citizens inside Israel, including education, housing, freedom of movement and choice of residence.
Earlier, the United Nations High Commissioner for Human Rights, Michelle Bachelet, called for strict respect for international law, and for independent, transparent and thorough investigations to be conducted into all allegations of violations of international human rights law and international humanitarian law.
Palestinian medical sources reported an increase in the number of victims of the occupation attacks in the Gaza Strip to 232 civilians, including 65 children, 39 women and 17 elderly, in addition to more than 1710 wounded, and massive destruction of homes and civilian objects.
In this context, the High Commissioner expressed her concerns that "some of the attacks launched by the Israeli army, targeting densely populated areas and civilian objects, do not meet under international humanitarian law the requirements necessary to be considered military objectives."  Bachelet added : "Failure to adhere to the principles of distinction, proportionality and precaution in conducting military operations amounts to a serious violation of international humanitarian law and may constitute war crimes".

Alkarama activity
On July 23, 2019, Alkarama wrote to the United Nations Special Rapporteur on the situation of human rights in the Palestinian territories occupied since 1967 and the Special Rapporteur on adequate housing, asking them to urge the Israeli authorities to immediately stop the demolition of Palestinian homes.
Alkarama warned that the home demolitions represent a flagrant violation of the right to adequate housing stipulated in Article 11 of the International Covenant on Economic, Social and Cultural Rights, as well as Article 17 of the International Covenant on Civil and Political Rights, both of which Israel ratified in 1991 and are applicable in The Occupied Palestinian Territories, in accordance with international jurisprudence.
In its message, Alkarama urged the two UN experts to act urgently, because this demolition process left the residents of the destroyed buildings homeless and exposes others living in this area to the risk of forcible displacement. This situation is consistent with a well-established pattern of home demolitions that are being systematically carried out by the Israeli occupation authorities against the Palestinians with the undeclared goal of demographic change in the region.