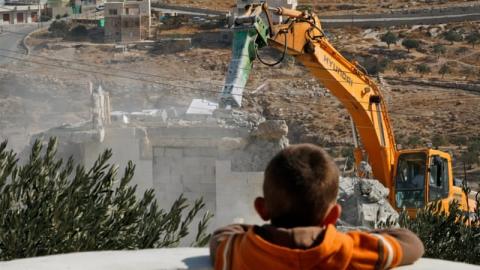 On July 23, 2019, Alkarama wrote to the UN Special Rapporteur on Special Rapporteur on the situation of human rights in the Palestinian Territory occupied since 1967 and the Special Rapporteur on adequate housing to ask them to urge the Israeli authorities to call on the Israeli authorities to immediately halt the destruction of houses near the Annexation Wall.
In the early morning of Monday the 22nd of July, security forces started destroying buildings on the edge of East Jerusalem. The destruction was authorised by the Israeli High Court of Justice which ruled that they had violated a construction ban, although residents stated they had been allowed to build their homes there by the Palestinian Authority.
This is an alarming development as it is the first time demolitions are authorised in Area A of the West Bank, where under the Oslo Accords the Palestinian Authority is the sole which has jurisdiction to issue construction permits.
In its letter, Alkarama urged the two UN experts to act, as this has rendered residents of destroyed building homeless and places others living in this area at risk of forcible transfer and forced displacement. This situation fits into a well-established pattern of house demolitions systematically carried out by the Israeli authorities against Palestinians.
House demolitions represent a clear violation of the right to adequate housing, as enshrined in article 11(1) of the International Covenant on Economic, Social and Cultural Rights as well as article 17 of the International Covenant on Civil and Political Rights, both ratified by Israel in 1991 and applicable to the occupied Palestinian territories, as international jurisprudence established.