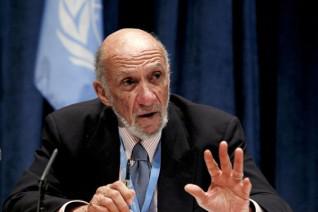 On 10 June 2013, Special Rapporteur on the situation of human rights in the Palestinian territories occupied since 1967, Mr Richard Falk, presented his report to the UN Human Rights Council. In this report, published on 3 June 2013, Mr Falk not only highlighted the plight of Palestinians detained by Israel, including children, but also "addresses Israel's Operation 'Pillar of Defense' and the general human rights situation in the Gaza Strip, as well as the expansion of Israeli settlements – and businesses that profit from Israeli settlements." He further underlines the continuous failure by Israel to cooperate with his mandate and denounces defamatory attacks against his person aimed at inhibiting his ability to carry out his mandate.
According to numbers cited by the Special Rapporteur, Israel was reported to keep around 4800 Palestinians, including 236 children, in its custody at the end of May 2013. With regard to the treatment of these detainees, Israel is responsible for "violations on a massive scale" including severe torture and other forms of ill-treatment, as reported by the expert.

By way of example, Mr Falk included reference to the death in custody of Mr Arafat Jaradat on 23 February 2013. Following the autopsy of the 30-year-old Palestinian, it was reported that his "death was caused by nervous shock resulting from severe pain, which was due to injuries inflicted through direct and extreme torture." The lack of investigation into Mr Jaradat's death is not an isolated case and referred to as an illustration for the larger routine impunity for officials interrogating Palestinians.

Also in relation to Palestinians in Israeli custody, the report notes the "abusive mis-use of administrative detention" - a practice in contravention of international humanitarian law as the detainees are effectively deprived of their right to a fair trial. The Special Rapporteur finally stressed that lack of access to legal representation, unacceptable detention conditions including solitary confinement of children, denial of visits by family members or the International Committee of the Red Cross seem to be commonplace for all detainees.

By way of conclusion, the Special Rapporteur lists a set of recommendations to address the effects of the illegal blockade of Gaza, to improve living conditions in Gaza and to further investigate the involvement of businesses benefitting from the occupation. With regard to the situation of Palestinians imprisoned by Israel, he calls on the international community to establish a commission of inquiry with a mandate which would include investigations into "Israel's track record of impunity for prison officials and others who interrogate Palestinians."
For more information or an interview, please contact media@alkarama.org (Dir: +41 22 734 1008).
Palestine
Torture
Arbitrary Detention
Freedom of Expression