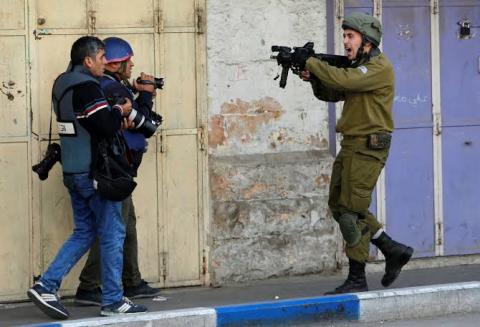 Previously, Alkarama worked on the case of Palestinian human rights lawyer and defender Sherine Al-Issawi, who was detained for three and a half years, until her release on 17 October 2017, when Sherine and her two brothers, Shadi and Medhat, were arrested in March 2014 and charged with "cooperation with actors operating against Israel", only to be released later.
According to the experts, "This is part of a clear and systematic pattern of Israeli detention and intimidation of human rights defenders, a pattern that has recently intensified. »
In the West Bank, where human rights violations are the daily life of Palestinians, a large number of Palestinians have chosen the path of journalism and the defense of human rights. Settlements continue to grow and the number of settlers who come to settle on the other side of the wall, sometimes driving Palestinians off their land with impunity and under the protection of the Israeli army, is increasing. The case of Issa Amro is thus only the tip of the iceberg in a state where the Israeli army gives itself every right to silence journalists, peace activists and human rights activists. Individuals arrested and detained are often represented by Israeli lawyers and tried by Israeli courts, which makes their trial unjust since the conditions of their defense are imposed on them.
Journalists covering peaceful demonstrations are regularly targeted by the army, which does not hesitate to gas and even shoot them with live ammunition. As an example, let's mention the case of the freelance journalist and photographer Muath Amarneh who lost an eye while covering a rally in Surif, in the Palestinian region of Hebron - Israeli-occupied territory. His case provoked a wave of outrage and journalists around the world posted photos of them hiding an eye in support of freedom of expression and demonstration.
The Israeli army regularly executes Palestinians arbitrarily but the Israeli discourse is always the same and uses the motive of terrorism to cover its crimes and to scare the Palestinian population on the one hand to dissuade them from rising up and on the other hand to separate them even more from the Palestinian population in a growing apartheid process.