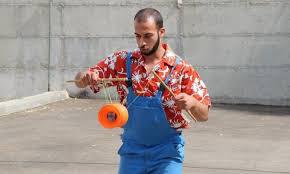 After nearly two years in an Israeli prison without charge or trial, 26-year-old Palestinian circus performer Mohammed Abu Sakha was released on August 31, 2017.

Abu Sakha was arrested by the Israeli army on December 14, 2015 while crossing the Zaatara military checkpoint near Nablus while on his way to work in Birzeit, a town close to Ramallah. Since then, he has been held under a series of administrative orders that have been regularly renewed.

Before his arrest, Mohammad Abu Sakha performed as a clown and also taught at the Palestinian Circus School  in Birzeit, where he worked with children with learning disabilities.

On December 25, 2015, a military court ordered his administrative detention for six months, alleging that he carried out “illegal activities” with the Popular Front for the Liberation of Palestine. Though he denied this accusation, the military prosecution did not disclose any evidence, making it impossible to challenge the legality of his detention or prepare his defence.

Abu Sakha’s detention was punctuated by hardship but also by mutual solidarity between inmates: “I spent my time talking and interacting with other prisoners, as well as reading, and exploring my interests. I maintained hope because all the prisoners were in the same situation (…), so we all shared the same thoughts of freedom from the Israeli occupation.”

Abu Sakha informed Alkarama that he had joined a collective hunger strike for 41 days to demand the respect of the most basic human rights: to pursue distance higher education, to access appropriate health care and medical treatment, to not be subjected to solitary confinement, administrative detention, and imprisonment without charge or trial, as well as the right to family visits.

Alkarama thus welcomes the non-renewal of the administrative order against Abu Sakha and his subsequent release, but remains concerned over the scale of administrative detention by Israeli authorities in the Occupied Palestinian Territories.

In a recent statement, the SROPT declared that “Israel’s use of administrative detention is not in compliance with the extremely limited circumstances in which it is allowed under international humanitarian law, and deprives detainees of basic legal safeguards guaranteed by international human rights law.”