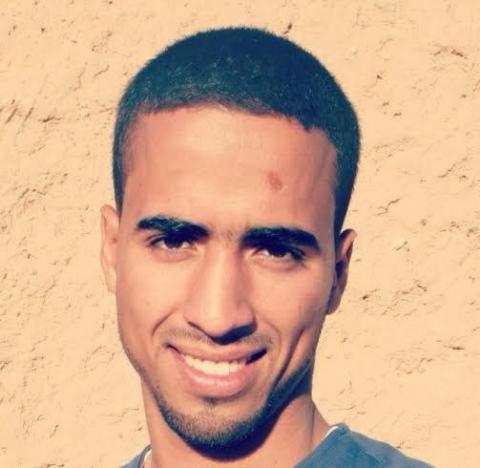 Salaheddine Bassir, a militant and journalist, was arrested in June 2015, tortured and jailed in Laayoune following an unfair trial. The experts of the UN Working Group on Arbitrary Detention (WGAD), said “he is arbitrarily detained” and called on the Moroccan authorities to release him. Today Bassir remains detained in the prison of Aït Melloul under particularly appalling conditions.

In their Opinion No. 11/2017 of June 16, 2017 the WGAD experts concluded that his detention is arbitrary because of the reasons of his arrest and conduct of his trial. In May 27, 2013, Salaheddine Bassir went to Smara to ensure the coverage of a demonstration in favor of the self-determination of Western Sahara on behalf of RASD TV, the television channel of the Polisario Front. Several demonstrators were then arrested.

Bassir went to Tindouf in Algeria after the repression of the demonstration, but was arrested two years later, on 8 June 2015, by security officers in civilian clothes in an unmarked car, while he was legally returning to Laayoune. They took him to Smara where he was interrogated; and signed under duress a document he was not allowed to read. He later discovered that the document contains his confession that he had "planned" and "participated in the clashes" during the demonstration of 27 May 2013. He denied the facts before the judge declaring that he was forced to sign the confession under torture. However, the Court of Appeal upheld on 14 November 2015 his sentence of four years' imprisonment, in violation of Bassir's rights to a fair trial.

Salaheddine Bassir "victimised for having expressed his political opinion"

Based on evidence provided by Alkarama, the WGAD experts qualified in their Opinion No. 11/2017 that Bassir’s detention is arbitrary, considering that it violates international human rights law, including the International Covenant on Civil and Political Rights (ICCPR), which Morocco ratified in 1979. Noting that the Government of Morocco could not produce other evidence than Bassir’s forced confessions, the UN experts recalled the prohibition mentioned in Article 14 (3) (g) Of the ICCPR which states that an accused should “not to be compelled to testify against himself or to confess guilt”.

The WGAD also stressed on "the widespread of wrongdoings practices against persons who, like Bassir, are advocating for the self-determination of the Saharawi population, in violation of international law". Thus, the experts considered that the latter had been "victimised for having expressed his political opinion", in violation of the International Covenant on Civil and Political Rights provisions guaranteeing freedom of opinion and expression.

In conclusion, the UN experts called on the Moroccan Government to take the necessary measures to address Bassir’s situation "without delay" by releasing him immediately and granting him the right to obtain reparation "in accordance with the international law”. The WGAD also requested the Government of Morocco to inform it of the measures taken to implement its recommendations within six months of the publication of the opinion. Lastly, the Working Group referred the allegations of torture raised by Bassir to the Special Rapporteur on torture and other cruel, inhuman or degrading treatment or punishment.