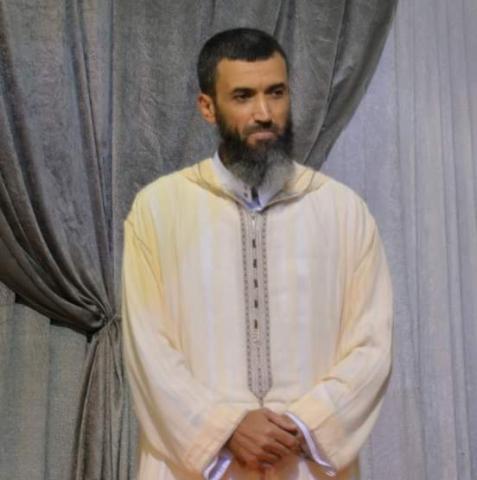 The daughter of Moroccan detainee, Rachid Al-Ghribi Al-Aroussi sentenced to 20 years in prison, of which 17 years and 7 months have passed, appealed to King Mohammed VI, asking him to release her father under an exceptional pardon due to his health condition, according to a letter obtained by Alkarama.
"My father was arrested in 2003, when I was a 5 year old little girl, and now I am a 22-year-old girl, mother of a child," said al-Ghribi's daughter, in a moving message. She added: "All these years have not been easy, the lack of my father and his absence by my side have strongly influenced my life. It is not easy, because my relationship with my father is more than that of a father with his daughter, he is a father but also a brother, a friend ... everything for me, and this has negatively influenced the course of my life, including my health. During the year 2019, I learned  the existence of a malignant disease that exhausts my body, which is a cancer and more specifically Hodgkin's disease, which led me to undergo chemotherapy, I was about to undergo what is called a pit scan, which allows me to know the level that the disease has reached in my body, but fate wanted me to cancel the pit scan because I discovered another problem which was the presence of water in my lung. I collapsed psychologically at that point and felt that the world was shrinking in every aspect. It was also at that time that I wished my father was with me so that I could have his affection and tenderness (.....), and after several tests, the result was the return of cancer in my body, so I am now about to undergo chemotherapy again. "

Alkarama's activity
The case of detainee Rachid al-Ghribi al-Aroussi received particular attention early on, due to a number of violations against him, and on 20 February 2015, Alkarama submitted Rachid al-Ghribi al-Aroussi's case to the United Nations human rights special procedures.
Al-Aroussi was arrested as part of the wave of arrests following the 2003 Casablanca bombings, and was sentenced to 20 years in prison after an unfair trial. Security agents arrested him at his workplace without a warrant on June 2, 2003, and he was held incommunicado for nearly three months, in clear violation of the country's legal procedures.
After his arrest, Rachid El Aroussi spent two days in the premises of the Tangier security forces before being transferred to the notorious Témara detention center, where he was interrogated under torture. Rachid says he was stripped naked, threatened with rape, beaten all over his body and deprived of sleep and food. He adds that when he was not being personally tortured, he could hear the sounds and moans of others being tortured or dragged through the corridors. After ten days of cruel torture, he was forced to sign his confession without being allowed to see it.
He was then transferred to Salé prison, and held incommunicado in an isolation cell lacking minimal hygiene conditions until August 27, 2003. He was only allowed to take a five-minute shower after 45 days, and only saw the sunlight for a few minutes three months later.
His shoulder was broken during his isolation and he was transferred to Souissi Hospital in Rabat only after five days of suffering. Faced with his critical condition, the doctor decided to perform immediate surgery, but the prison administration refused to do so and settled for a superficial treatment to send him back to his cell. Deprived of proper treatment, tortured and subjected to harsh prison conditions, he still suffers from the effects of the fracture.
Rachid Al Ghribi stated that during his incommunicado detention, he met on several occasions, in the absence of his lawyer, with a judicial official who ordered him to sign the minutes without having access to them. On August 27, 2013, he was brought before an investigating judge for the first time, in the presence of the lawyer, who informed his wife of his fate to end the state of anxiety and anticipation she had been experiencing for three months.
The Rabat Court of Appeal relied on Rachid's confessions extracted under torture and decided on September 18, 2003, after a formal trial, to imprison him for 20 years for "forming a gang with the aim of committing terrorist acts," "possession of weapons and explosives," and "gathering without a license and carrying out activities within the framework of an association without a license."
Following Alkarama's complaint, the United Nations Working Group on Arbitrary Detention, during its seventy-third session held on 4 September 2015, adopted a resolution under no. 34/2015 in which it considered that the deprivation of liberty of Rachid al-Ghribi al-Aroussi is arbitrary, as there is no legal basis for the judgment against him, which confirms the violation of his right to a fair trial. The working group also noted that the Moroccan state has not presented any evidence to refute the victim's allegations of torture. As a result, the working group called on the Moroccan authorities to release him immediately and to compensate him for the physical and moral damages resulting from his arbitrary deprivation of liberty.
Alkarama has repeatedly discussed Aroussi's case before UN bodies, whether in the context of its shadow reports to the UN Human Rights Committee, its reports to the Human Rights Council during the UPR, or its correspondence with the UN General Secretary regarding reprisals against peaceful dissidents and human rights activists. Al-Aroussi has remained under arrest, and Moroccan authorities have ignored actions and positions condemning his continued detention and deprivation of liberty.