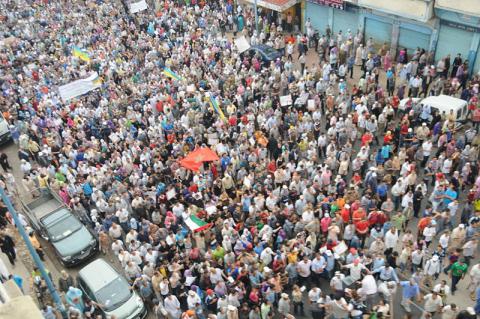 On 23 September 2016, Alkarama submitted to the United Nations Human Rights Committee (HRCtee) its report on the implementation of Morocco's obligations under the International Covenant on Civil and Political Rights (ICCPR) in view of Morocco's upcoming review on 24 October. Highlighting the discrepancy between the State's report and the reality on the ground, Alkarama suggests 23 recommendations to improve the human rights situation in the country. Alkarama will also present its main concerns to the HRCtee experts as part of a meeting which will be held before Morocco's review.

In its report, Alkarama addresses several issues, including those related to the lack of independence of the judiciary, to human rights violations committed in the fight against terrorism, to the restrictions of the freedoms of expression and peaceful assembly, and to the limited nature of the process initiated by the Equity and Reconciliation Commission in order to redress the violations committed during the "years of lead".

Independence of the judiciary

Regularly denounced by civil society, the lack of independence of the judiciary vis-à-vis the executive is a major challenge for the Kingdom. A great reform of the justice system has been initiated in recent years in order to strengthen this independence, including by redefining the status of the judiciary, the scope and function of the Superior Council of the Judiciary, and the military courts' jurisdiction.

Alkarama notes that fair trial guarantees are yet to be always observed and that the country is facing a shortage of forensic doctors detrimental to the quality of appraisals conducted which are rarely conform to international standards. Alkarama further notes that the excessive use of preventive detention promotes prison overcrowding and that detainees continue to suffer abuse.

The Anti-terrorism Law significantly reduces the procedural guarantees in this area by bringing to 12 days the period of police custody and by only allowing access to a lawyer after 48 hours. The convicts for terrorism are abused in prison on the pretext of disciplinary measures. During their recent visits to Morocco respectively in 2012 and 2013, the UN Special Rapporteur on Torture (SRT) and Working Group on Arbitrary Detention (WGAD) deplored the persistence of torture, particularly in cases of terrorism or related to the question of Western Sahara. Some human rights activists have also suffered intimidation and reprisals for their activities. Some human rights defenders have also suffered intimidation and reprisals for their activities.

The consequences of the wave of repression that followed the Casablanca attacks in Casablanca in 2003 continue to be felt. Alkarama had documented numerous cases of convictions based solely on confessions obtained under torture during periods of incommunicado detention, and thousands of sentences had been passed following unfair trials. Many people convicted under these conditions are still held today, despite the recommendations of the WGAD, such as Mohamed Hajib and Rachid Ghribi Laroussi.

Several journalists were prosecuted under the charges of "insulting the person of the King" or undermining territorial integrity. Their trials have shown the chronic tension between the press and the authorities. The authorities refused to register many associations because of their political orientations and objectives pursued. Only those officially registered are allowed to organise demonstrations on public roads.

Thus, spontaneous gatherings are considered to be mobs, whilst the police also regularly makes use of excessive force to disperse peaceful demonstrations.