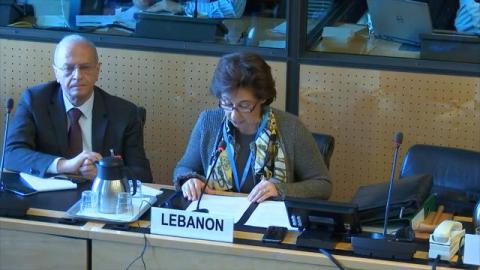 On 12 May 2017, the United Nations Committee against Torture (CAT) published its Concluding Observations following the first review of Lebanon in April. During the review and despite unanimous NGO accounts to the contrary – including in Alkarama’s shadow report –, the Lebanese delegation affirmed that instances of torture were “isolated events” which did not correspond to a “State policy”. However, the 10 independent UN experts deplored that security forces “continue to routinely use torture” on detainees, including children, to “extract confessions to be used in criminal proceedings or as a form of punishment”. They furthermore recalled that no exceptional circumstances whatsoever – including threat of terrorist acts of violent crimes – could be invoked as a justification of torture. The Committee also regretted the “low rate of implementation” of recommendations they made in 2014 following their confidential inquiry in the country.

Non-compliance of the draft law on torture with international standards

During the review, the Committee expressed concern over the absence of a definition of torture in domestic legislation. The State delegation responded that a law had been drafted to remedy these shortcomings, citing some of its provisions as examples. However, in their conclusions, the experts did not consider this law as sufficient, highlighting that the penalties provided were inadequate and that the statutes of limitation included in the text was contrary to the country’s obligations under the Convention against Torture (UNCAT).

Alkarama was able to obtain a copy of the draft law* and is preoccupied by its lack of compliance with the UNCAT. First, the definition of torture excludes acts which are still characterised as torture by article 1 of the Convention and does not extend to acts of cruel, inhuman or degrading treatment or punishment. Second, it merely provides sentences ranging from one to three years of imprisonment, which does not reflect the gravity of the crime. Third, the law does not ensure that the prohibition of torture is absolute and non-derogable and establishes a statute of limitations, which means that torture cannot be prosecuted after a certain period of time.

In its conclusions, the Committee denounced the fact that “lawyers are usually not allowed to meet with their clients during the period of the investigation” and that the 48-hour delay to bring a suspect before a judge was often disrespected. In light of reports of torture in custody, the Committee was concerned that “the use of torture to extract confessions [remained] prevalent” and alarmed by the absence of a provision in its domestic legislation rejecting the admission of such confessions during trial. It also denounced the failure of courts to investigate such allegations and recommended that action be taken against judges who fail to respond to allegations of torture raised during proceedings.

Absence of national monitoring mechanisms and a prevailing climate of impunity

According to the UN experts, the absence of investigations into complaints of torture creates a climate of impunity. During the review, the State provided no information on investigation or sentencing of perpetrators, leading the CAT to call on the authorities to promptly launch investigations and ensure that suspects are suspended from duty.

In addition, the Committee regretted that no independent State body had been established to investigate complaints of torture. While the Committee welcomed the adoption of Law No. 62 of 2016 establishing the National Commission for Human Rights (NCHR), it regretted that its members had not yet been formally appointed. It thus called on the authorities to complete the selection process and ensure the NCHR fulfils its role as a national preventive mechanism (NPM) by carrying out unannounced visits to places of detention. The experts also called on Lebanon to authorise non-governmental organisations to undertake similar prison monitoring activities.

While the Committee commended the efforts made by Lebanon to welcome asylum seekers on its territory, including over a million Syrian refugees, it expressed concern over practices contrary to the principle of non-refoulement. The experts therefore reminded Lebanon that the Convention was affording “absolute protection” to anyone under its jurisdiction, “regardless of the person’s nationality, judicial status or the danger that he or she may pose to society”. They echoed Alkarama’s concerns, particularly following the extradition of an Iraqi refugee to his home country despite risks of torture and death sentence.

Although Lebanon’s next period report is due on 12 May 2021, the Committee gave a year to the authorities to implement the following four recommendations as a matter of priority:

Alkarama will be closely following up the situation of torture in Lebanon and will provide the Committee with a follow-up report assessing the implementation of these recommendations.

*Alkarama obtained a copy of the draft law on torture as amended by the Administration and Justice Committee. This copy is not an official document.