Lebanon: Lawyer Nabil Al Halabi, at Risk of Prosecution for Criticising the Minister of Interior in a Facebook Post 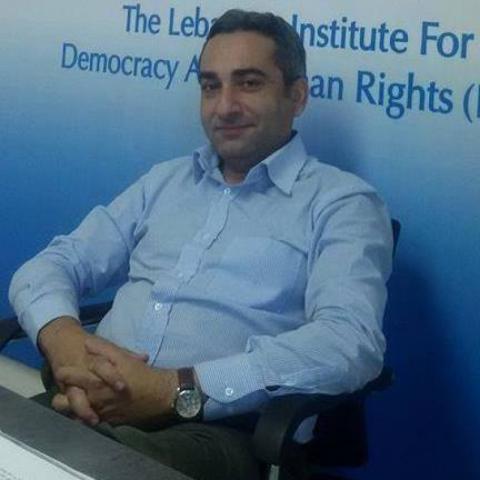 Nabil Al Halabi, Lebanese lawyer and director of the Lebanese Institute for Democracy and Human Rights (LIFE), has always been a vocal critic of corruption, the use of military courts and torture in Lebanon. Al Halabi has always been actively and frankly expressing his political views on his Facebook account.

This time, though, expressing his opinion lead him to have his immunity as a lawyer lifted by the Beirut Bar Association (BBA) on 15 April 2016, following a Minister of Interior's complaint against him for "libel and slander", as well as threats from Lebanese Internal Security Forces (ISF). As Al Halabi risks being prosecuted for a mere act of free speech, Alkarama raised his case on 9 May 2016 with the Special Rapporteur on the promotion and protection of the right to freedom of opinion and expression (FREEDEX).

On 4 April 2016 Al Halabi published a Facebook post denouncing corruption within the office of the Ministry of Interior and alluding at his connivance with the managers of a sex trafficking ring discovered in Lebanon only a few days earlier. His post referred to a raid carried out on 27 March 2016 by ISF in two buildings: Chez Maurice and Silver Hotel, in the town of Maamelteine, 20 kilometres north of Beirut. The ISF found there 75 women, mostly Syrian, who were imprisoned, abused and forced into sexual slavery for years.

On 11 April 2016, the Minister of Interior filed a complaint against Al Halabi with the Public Prosecution in Beirut for libel and slander, acts criminalised under articles 383 and 384 of Lebanon's Penal Code, using as evidence, among others, his 4 April Facebook post.

On 13 April 2016, LIFE issued a statement backing its director and announced the closure of its office for a week as a form of protest. During this week of closure, ISF members were seen patrolling the area around LIFE offices, most likely carrying out a surveillance mission on Al Halabi.

On 15 April 2016, the BBA decided to lift Al Halabi's immunity as a lawyer for the case opened by the Minister of Interior.

"We are extremely concerned to note that Al Halabi's immunity was abusively lifted, since it concerns accusations of 'libel and slander', a crime that is not even provided in international law since this charge can be, and often is, used to allow prosecution for acts of freedom of expression, protected by international human rights law," commented Inès Osman, Coordinator of the Legal Department and Legal Officer for the Mashreq region at Alkarama. Indeed, International law principles provide that libel and slander cannot be prosecuted as a crime but rather in a civil suit.

Since lifting Al Halabi's immunity puts him at risk of prosecution for a mere act of free speech, and given the threats aiming at silencing him, Alkarama sent a communication to raise his case with the Special Rapporteur on the promotion and protection of the right to freedom of opinion and expression (FREEDEX) calling upon him to demand the Lebanese authorities to abandon any prosecution against him and the Beirut Bar Association to reinstate his immunity.